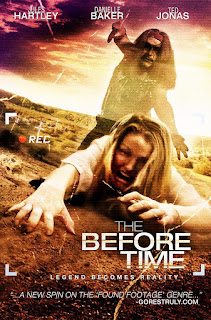 The Film
The headless bodies of eight Hispanic men have been found in the Arizona desert spiking TV ratings. An independent producer proposes a reality TV show idea to capitalize on the story and the ratings based around two rival groups investigating the story and the legend of an ancient treasure of gold buried in the area but they quickly find out the truth lurking in the desert is far more dangerous than they could have imagined.

THE BEFORE TIME uses the found footage, handheld camera style to show the story of this reality show cast as they venture in to the desert and try to set up shots and scenes for their production. The group is filled with semi-famous local talent and a lot of shitty young attitudes with big dreams about making it big. Sometimes they're serious about getting their work done and others they're disrespecting locals and acting like stereotypical assholes. They fall victim to creepy natives, drug laced foods and ghostly occurrences as each day brings them deeper and deeper into the unforgiving desert. 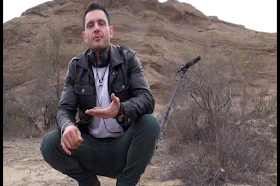 It all feels familiar, like ground we've tread before. It's predictable and despite being decently made and having an exciting scene or two, it's not very interesting. The cast is decent but their writing is lazy. The movie leaves too much to the imagination and doesn't give us the visual goods often enough. It's an attempt at making the film more psychologically driven than it needs or even should be.

THE BEFORE TIME isn't a bad film overall but it doesn't capitalize on its best aspects and suffers from many of the downfalls of the found footage style.

The Audio & Video
Brain Damage Films gives THE BEFORE TIME a nice home on DVD with a 16x9 anamorphic widescreen transfer that has a sharp look and good colors for a standard def transfer. Black levels are deep and there's no problems with compression or blocking. The mostly English audio which features sporadic Spanish with English subtitles is handled with a 5.1 surround mix which sounds very nice. There's no damage or background noise and the overall quality is crisp and powerful when needed. 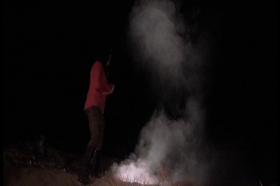 The Extras
-Behind the scenes featurette
-Trailer 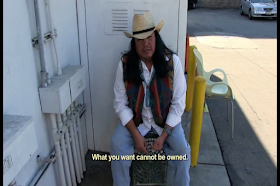 The Bottom Line
If you're a lover of the found footage genre you'll find plenty to enjoy with THE BEFORE TIME.

THE BEFORE TIME is available HERE
Celluloid Terror (Seth Poulin) at 2:13 PM