The Film
The tag line reads "When violence demands revenge..." and that about sums it up. THOU SHALT NOT KILL... EXCEPT is one of dozens of vigilante films that would be released from the late 70s through the 80s. Marine Sergeant Jack Stryker has been sent home from the Vietnam War after taking several bullets to the leg. Now at home and walking with a cane he is struggling to readjust to civilian life. After rekindling his connection with his dog Whiskey, he is persuaded to visit an on old girlfriend, Sally, by her grandfather who is a friend and owns the local bar. As Stryker hits it off with Sally some old friends come to visit him on the day of his first "big date" with Sally. They pass the time until the next morning when Stryker realizes that Sally never came to pick him up and Whiskey is missing. The group spreads out to look for Whiskey and each of them stumble across a different scene of terror and madness as a gang of drug riddled hippies have taken the campgrounds that Stryker lives near hostage and are performing bizarre acts of violence and sacrifice. Stryker visits Sally's house to find a bloody mess with her grandfather murdered on the floor and no sign of Sally. This sets up the meat and potatoes of the film, which is why we all sit down to watch it. The Marines battle it out with The Manson Family and the blood goes flying. Shot on a microscopic budget in and around the Detroit area THOU SHALT NOT KILL...EXCEPT looks the part. It's rough around the edges, the lighting is almost entirely natural and the scenery is drab and dreary. This is just fine with me. We didn't sign up to have our minds challenged, we signed up to see some baddies get what they have coming. The acting isn't great but everyone involved is passionate and puts their all in to it. The writing is a bit slow going in the beginning but when things get going it is pedal to the metal and the action doesn't let up until the credits roll. You won't find any surprises with THOU SHALT NOT KILL...EXCEPT. What you will find is pure and shameless exploitation of the 60s and 70s, and it just feels right. 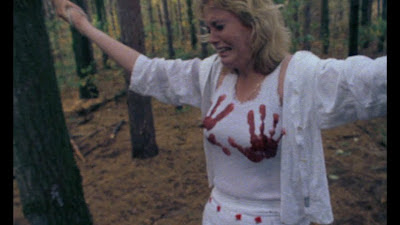 The Picture
THOU SHALT NOT KILL...EXCEPT makes it's debut on Blu-Ray with a brand new 2K high-definition transfer from the original negative in an anamorphic 1.66:1 Widescreen presentation and is generally a success. Flesh tones are represented nicely and the reds of the blood shine. Night time scenes suffer from a heavier digital noise similar to the Italian Blue Underground titles. The noise is present in other scattered scenes but to a much lesser degree. The positives certainly outweigh the negatives with a number of scenes looking fan-fucking-tastic (check the murdered sheriff shot) and I doubt the film has ever looked better or will ever look better. Please Note: Screengrabs were taken from the DVD copy of the film.

The Audio
A DTS-HD 2.0 Mono track is the only available audio option and gets the job done just fine. It is a clean track free of any hiss or crackling with the dialogue coming through clear. The soundtrack (which is surprisingly good for a film of this type) is crisp and the levels are mixed appropriately so one doesn't interfere with the other. 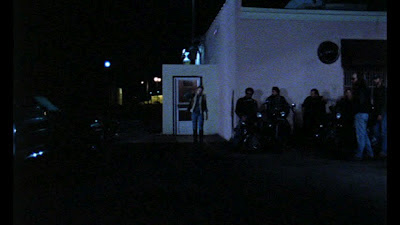 The Extras
If you asked for quantity or quality Synapse Films would laugh and give you both. This Blu-Ray/DVD combo pack is absolutely loaded with special features.

-Made In Michigan: The Making of THOU SHALT NOT KILL...EXCEPT - This is a great documentary with several people involved in the making of the film including the director Josh Becker and Ted Raimi. Clocking in at over half an hour this covers everything from the inception to the short film that this would turn in to and international distribution.

-The original 8mm film STRYKER'S WAR starring Bruce Campbell - This is what Within The Woods was to The Evil Dead. A very cool thing to have


The Bottom Line
THOU SHALT NOT KILL...EXCEPT comes to us from Synapse Films and is a very impressive release. From the film itself, to the restoration work and the impressive slew of supplements I have no problem highly recommending this release. THOU SHALT NOT KILL is available for pre-order here