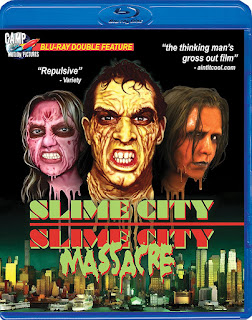 The Films
The mid 80s to early 90s were a time where melt horror was big. Audiences loved seeing bodies melt into piles of often Day-Glo colored goo and directors loved giving it to us. SLIME CITY is one of those pictures falling smack dab in the middle of the period. Writer/director Greg Lamberson gave us the aptly titled picture in 1988 with the story of Alex who has just moved in to a new apartment building that is filled with strange tenants. His journey to body melt hell begins when he's invited over to a neighbor's place for dinner where they eat blue and green colored Himalayan yogurt and drink a strange green brew. Soon after Alex finds his skin melting off of his body and his face containing grotesque pimples and boils that leak strange colored fluid. His temperment from a normal college student has changed to that of an angry lunatic that will attack anyone at will. The symptoms of this strange yogurt and drink take effect in stages, almost like Jekyll and Hyde and he discovers that an old alchemist who also worked in Voodoo and the occult created this drink and the yogurt in a strange ritual that now leaves Alex in a perpetual state of murderous rage and melting away to nothing.

SLIME CITY not only fits in with all of the melt horror films of the time but also with countless low budget B-movies set in grimy 1980s era New York City. It is incredibly rough around the edges with a plot that is a bit convoluted and silly leading way to the reason we are tuning in to the film to begin with. Special attention is paid to the special effects work done by Scott Coulter and his work is quite good. The neon slime is the easy part but a crawling brain and man eating stomach orifice were the harder parts and they all look great. Greg Lamberson's direction is solid as he gets competent and believable performances out of his cast, especially the lead Craig Sabin who is able to carry on both the "Jekyll" and the "Hyde" needed from his character, all while being slathered in goo.

SLIME CITY is still rough around those edges and remains an imperfect picture. It rarely strays from the safe confines of the apartment building which is shame because seeing a neon monster melting all over 42nd street would have been something truly amazing. Having said that I still find SLIME CITY to be a successful and wildly entertaining slice of 80s horror.

Apparently the world needed more slime because in 2010 the world was introduced to SLIME CITY MASSACRE which takes place in a derelict city (shot in Buffalo, NY) after a dirty bomb goes off and wipes out most of the population. The survivors are in a post-apocalyptic wasteland trying to find food and clean water. Cory and Alexa find their way in to an old building where two others are living and trying to stay out of the way of the heartless businessman Ronald Crump (funny how the timing of this Blu-ray release and the current state of American politics have matched up) who wants to buy out the entire city and rebuild despite the radiation and health hazards while letting his henchmen lay waste to the survivors occupying the area. The four squatters find a stash of weird alcohol and "unexpirable" Himalayan Yogurt in an area beneath their pad called the Zachary Devon Soup Kitchen and they all proceed to get wasted on the hooch and eat the yogurt. I bet you can guess what begins to happen here.

SLIME CITY MASSACRE is very much the original SLIME CITY but set in a post-apocalytpic world and filled with moments of awful CGI and bad green screen. There is still some of the wonderful practical effects like the original had but there's also quite a bit of poorly rendered digital effects and unfortunately that's what the entire movie feels like - A poorly rendered updated version of the original. SLIME CITY MASSACRE is okay, it's a passable film with some enjoyable moments but it also has some really bad moments such as a scene that you'd see in something like Bum Fights and Lloyd Kaufman's cameo in the beginning. SLIME CITY MASSACRE isn't horrible but it's just okay with more convoluted plot points that are retreads from the first and some corny flashback scenes that we could have done without. It's still a slimy, gooey, entertaining B-movie but it's easily the weaker of the two films.

The Audio & Video
Camp Motion Pictures gives this pair of neon splatter flicks their high definition debut in a pair of anamorphic widescreen transfers. The original film unfortunately doesn't look so fantastic. The image is riddled with digital noise and any sharpness is really dampened because of it. Colors are okay but could certainly use a bit more pop. Detail levels and overall image quality is only a hair of an improvement over the DVD. The audio suffers from some audible hiccups and crackling throughout. Otherwise the audio sounds decent but is definitely not pristine. While the film is definitely watchable  I can't help but feel disappointed that the A/V isn't better.

On the other hand the far more recent production of SLIME CITY MASSACRE looks and sounds quite a bit better as you'd expect. The image is sharp with good detail level. The only downfall in the superior picture quality is that the weak green screen and CGI stand out more but it is a small price to pay. Colors are vibrant and vivid, popping just the right amount. Skin tones are natural and healthy while the audio sounds crisp and clear, a vast improvement over the condition of the first film's track.

The Bottom Line
I'd absolutely love this Blu-ray release if the original SLIME CITY looked better but a pair of fun films, a slew of special features and a very nice looking transfer on the more recent film make this release and easy recommendation.

Awesome review Seth! i'm gonna go ahead and get the bluray since it will probably be more if i bought the dvds. i love slime city i'm looking forward to slime city massacre plus Debbie Rochon is in it i love her in Terror Firmer and Troma's Edge Tv. later man