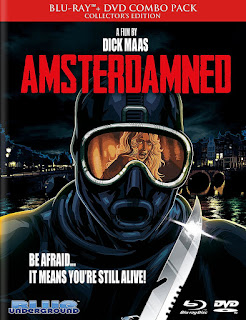 The Film
Amsterdam is the biggest city and capital of The Netherlands, a port city made up of over 25 miles of canals throughout the city. These waterways prove to be the perfect passages for an experienced scuba diver to travel through the city undetected and commit heinous crimes. As the body count rises it is up to detective Eric Visser to track down the murderer and protect the residents of Amsterdam including his new girlfriend.

AMSTERDAMNED was filmed in 1987 and released the following year. It mashes up the slasher film, which was still a big deal even if we were at the tail end of its huge run and action films like Die Hard and Lethal Weapon. The story of the film is based around a killer stalking the waters of Amsterdam first at night before more brazenly killing in the day time with the murky waters concealing him. His weapon of choice is a typically a serrated diver's knife but also makes use of more standard cutlery and spear guns, leaving his victims a bloody, mutilated mess that even surprises the doctors as they note that organs have almost been rearranged during the massacre. The motive is unknown through almost the entire movie, we're dealing with someone that is simply mad, a deranged individual that is totally remorseless. Eric Visser (Huub Stapel) is one of the top detectives on the police force and has been assigned the case and for a large portion of the film he and his colleagues are powerless to stop the killing spree, not for lack of effort. Visser is a likable cop, strong but flawed and relateable. He's a single father to a mouthy but altogether decent teenage girl and doesn't come across as too much of a headstrong, arrogant asshole that so many detective characters in films like this can. As his ability to solve the case is called in to question you begin to root for Visser even harder because you're drawn to him. 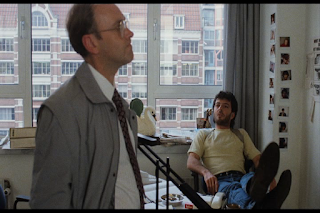 The film takes the horror aspect and turns it into a platform for action. AMSTERDAMNED is packed with chase scenes, both on land and on water. The film's best scene is a lengthy speedboat chase through the canals (and through the patio of a cafe) that turns in to a foot pursuit through the sewers. It's goes from incredibly intense high speed action packed with death defying stunts and a giant explosion to a tense, claustrophobic experience that almost plays out like a game of cat and mouse before a face to face encounter between Detective Visser and the killer. There's also a definite giallo influence to AMSTERDAMNED. Visually it doesn't take much imagination to link the black wetsuit and dive mask killer here to the black gloved killers with their razor blades to the Italian murder thrillers from a decade prior. It goes further with the hidden identity of the killer, the investigation of the killer by a citizen involved with the crimes (though that is a much more minor part of AMSTERDAMNED than it would be in a typical giallo), and of course the revelation of the killer's motive which plays as big a role in this film as it does in any giallo. Now I certainly wouldn't consider AMSTERDAMNED a giallo, but the influence is there and it wouldn't be out of place being played along side them.

AMSTERDAMNED is filled with capable actors and Huub Stapel proves to be a more than capable leading man. On top of being relatable and likable he's strong and charismatic without being a caricature of a real person. His chemistry of a smitten, budding relationship with Monique Van De Ven's character Laura comes off as genuine and real. Van De Ven portrays a strong but vulnerable woman that may be all too close to the killer without realizing it. She's a fantastic leading lady. Dick Maas created a film that at the time of filming was the most expensive film ever produced in Holland. And it shows. Maas proves to be a very capable director handling more delicate and intricate scenes with the same ability as he does the elaborate stunt-filled scenes. When the film called for a horror scene he makes it scary and suspenseful and when it calls for a balls to the wall action scene he gets the best work you could imagine out of his stunt coordinator Dickey Beer who had previously worked on films such as Return Of The Jedi and Indiana Jones And The Temple Of Doom and is still a prominent stunt man in Hollywood today. 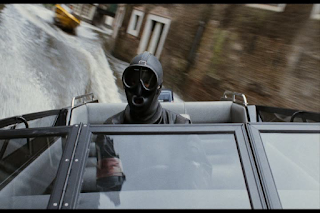 If there's anything I disliked about AMSTERDAMNED is that it restrains itself a bit too much at times. The murder sequences are almost all off screen in terms of the graphic violence which is surprising given how action packed and in your face the movie is during the more action movie oriented sequences. It left me feeling a bit cheated and thinking that we can get a five minute boat chase scene that took days to film but we couldn't get a bit of actual on screen special effects for the killings. Though I could argue with myself that the dead hooker hanging from the bridge scene is enough blood to last the whole movie. There's also a small side plot that disappears as fast as it shows up but ends up playing an important role in the grand scheme of things. It doesn't really hinder the movie but it did make me think that it was introduced and tossed away without even the hint of a resolution. It also may have the most out of place theme song for any movie ever, thankfully it only plays over the end credits where it can be enjoyed... somehow.

Those minor gripes aside I love AMSTERDAMNED. Obviously I'm a huge fan of all of its influences and I think Dick Maas put them together to form this movie quite well. He makes damn good use of a truly one of a kind setting that couldn't be recreated on any sound stage and it all results in a wild ride through the canals of Amsterdam. 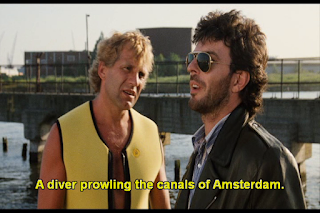 The Audio & Video
I'll make mention of some controversy and complaints that have made their rounds on the internet in recent days regarding the transfer of this release. There have been complaints of heavy compression issues and blocking from a poor authoring job that Blue Underground is looking in to. I will say that I did notice some intermittent compression issues here and there and there is layer of digital noise that is heavier than it should be but overall the transfer which comes from a new 2K scan and restoration looks quite good and a better authoring job which is not the direct fault of Blue Underground would likely have this release looking nearly pristine. As it stands AMSTERADAMNED looks sharp, and has great detail. It's only a quibble that the natural grain has to compete with digital noise and compression artifacts from time to time. The film features a 5.1 DTS-HD audio track in the film's native Dutch with English subtitles. This track is impeccable. It's crisp and clear that is powerful when need be and let's the synth driven score add a mood to the film when need be. There's no background noise or damage to mention. Also included are Dutch and English 2.0 DTS-HD tracks and optional English, French and Spanish subtitles.

If Blue Underground does issue some sort of updated disc with better authoring I will welcome it with open arms but if they choose not to I'd understand and still be totally satisfied with this release of AMSTERDAMNED as I think it still looks far superior than DVD ever would and I can't imagine any release of this on home video has even approached the image quality shown here.

Please note: The screen grabs do not represent the Blu-ray quality. 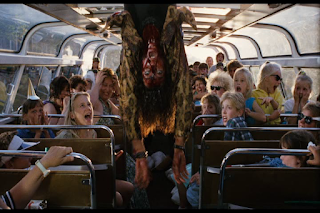 The Extras
Blue Underground has compiled a very healthy selection of special features which truly make this the definitive edition of AMSTERDAMNED. The features include:

-Audio Commentary with writer/director Dick Maas and editor Hans Van Dongen
-"The Making Of AMSTERDAMNED" - a vintage 36 minute documentary on the film and its production in and around Amsterdam.
-"Tales From The Canal" - A 9 minute interview with star Huub Stapel as hell tells his memories and stories on a boat ride through some of the canals seen in the film and how the film sticks with him even now in the form of injuries received while filming
-"Damned Stuntwork" - An interview with the stunt coordinator Dickey Beer running 18 minutes.
-Theatrical trailers
-Lois Lane "Amsterdamned" music video
-Poster and still gallery
-Booklet with new writing on the film by Michael Gingold 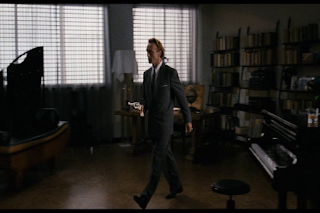 The Bottom Line
Maybe it's time Blue Underground switch authoring houses as the controversies surrounding many of their recent releases seems to outweighing how good the release is. I don't pretend to know their situation with the team authoring their discs but it is enough of a problem that fans are noticing it and it's a repeat issue. Blue Underground is a company I love and is putting out some great films in great releases but the majority of the discussion about them seems to be about these gripes (and rightfully so to some degree) instead of all the positives about the discs such as how good the transfer really is aside from a botched authoring job, or the great bonus features or the film itself. AMSTERDAMNED is not a perfect release but I have no problem fully and highly recommending it to fans of the film or anyone looking to watch it for the first time. The good vastly outweighs the bad which I've personally found to be a bit exaggerated. If there's any update from Blue Underground on a re-release I will update this review and make mention of it at the Celluloid Terror Facebook page. Until then grab this release and enjoy the damn movie!

AMSTERDAMNED is available HERE
Posted by Celluloid Terror (Seth Poulin) at 1:29 AM