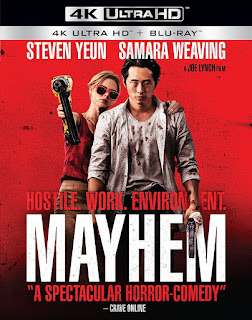 Derek Cho (Steven Yeun) has been busting his ass for a law firm rising through the ranks to find himself in a nice corner office with a good position as a law analyst only to find himself being set up to take the fall on a major account by his own firm's dirty tactics. Unfortunately for the executives, a deadly virus that spread wildly in recent months and causes the victim to lose any sense of inhibition and act out on their wildest ideas whether they be silly, sexual or just plain violent, has made it's way in to the building and an 8 hour quarantine has everyone locked inside until an antidote can be filtered in through the vents. Derek and a client (Samara Weaving) whose home is being foreclosed on because of the law firm simply not giving a shit decide to get some revenge on the soulless bloodsuckers at the top of the office building while the virus gives them legal impunity. 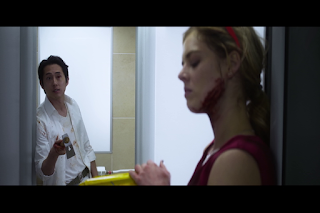 MAYHEM is a movie that anybody who has ever been mistreated, talked down to, used and abused, overlooked or under appreciated by their boss can appreciate. I think I've included a good 90% of the population. How many times have we dreams about getting one clean punch in, free of consequences, at our bosses. Or better yet, being able to overtake their position and give them a dose of their own medicine on their free fall down the ladder. Steven Yeun who any genre fan probably knows best as Glenn from The Walking Dead TV series, is fantastic as Derek, an average guy who has sacrificed and bested his ass for a company and to get some level of success and for what? Just to get spit on. Literally and figuratively. He's a perfect Joe Everyman and turns in a great performance that the audience can rally behind. His counterpart is Samara Weaving who plays a sassy, sexy and as we come to find out, tough and badass woman who is in a tough spot as the law firm won't help her with a two month extension on her loan and is planning to foreclose and take her home. After a brief spat with Derek they end up locked up together during the quarantine and reach a mutual breaking point and arm themselves with everything from a nail gun to an electric saw and hand tools. 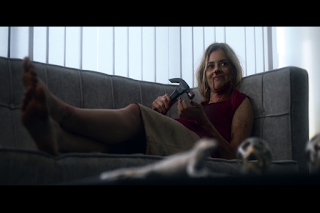 The film plays out like The Raid meets The Belko Experiment (in the world of Office Space) as they fight their way up each floor of the office building and lands somewhere firmly between the two. It's not the action classic that The Raid is but I think it's a better gory office horror film that is far more relatable and engaging than The Belko Experiment. Yeun and Weaving play off each other brilliantly and Joe Lynch has never been more sure footed behind the camera. His direction is solid and slick in spots to add some flair to MAYHEM that raises it up a notch. The unsung hero of the film is Steve Moore who provides the score and it's a moody, at times catchy, and overall pulsing synth driven piece of music that lurks in the background until the film needs the punch that Moore's score adds to really get the audience's adrenalin pumping. While watching the film I was thinking to myself how much I liked the score and then I saw Steve Moore's name pop up in the credits and it all made sense. Moore is a member of the band Zombi who writes synth driven rock not unlike Goblin and it's always a treat to get a soundtrack from him. 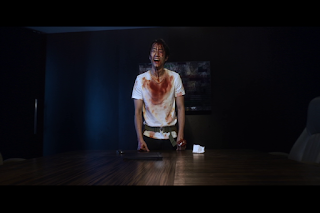 I like MAYHEM a lot. It's straight forward, well written and executed, highly entertaining and something you can easily place yourself in. It's not perfect and there's plenty of things that require a suspension of disbelief but I had so much fun with it and think this is one of the hidden gems of genre film of 2017.

MAYHEM is available on 4K, Blu-ray, and DVD HERE.
Posted by Celluloid Terror (Seth Poulin) at 12:35 AM