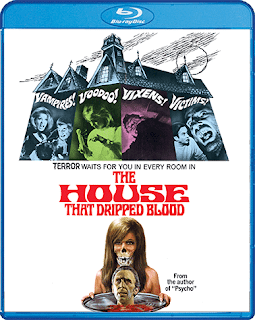 THE FILM
Ahh Amicus Productions, because Hammer wasn't enough we were blessed with Amicus who, if Hammer was the star of the show, Amicus would be his leading lady. Amicus may not have been quite as good or renowned as Hammer but they were and still are a beloved part of horror history and put out some great films including plenty with Hammer's own poster boys Peter Cushing and Christopher Lee. Not the least of which was 1971's THE HOUSE THAT DRIPPED BLOOD, an anthology film from writer Robert Bloch (Psycho, Torture Garden) and directed by Peter Duffell who spent most of his directorial career making TV shows which may have lended a hand to the success of this anthology film that features a handful of short stories revolving around a sinister home whose tenants fate's usually end in misery.

In the film's wraparound segment John Bryan portrays A.J. Stoker, a real estate agent who has been contacted by Scotland Yard after a the house's most recent tenant, a famous actor, has mysteriously disappeared and he tells the detective of the sinister history surrounding the house which leads to four tales adapted from short stories that had previously been published in magazines such as Weird Tales and Unknown dating back as early as 1939. The stories feature Peter Cushing in a story of a macabre waxwork museum that features the statue of a woman he once knew and Christopher Lee as the single father of a young daughter that may not be the sweet innocent child she seems to be. The other stories include a tale of murder and betrayal when a writer and his wife move into the home only for the man to be tormented by a character he wrote in his new story and a famous horror movie actor that may turn in to a real vampire when he dons his newly acquired antique cape only for his co-star (played by the legendary Ingrid Pitt) to discover. As the film's tagline states, "Terror waits for you in every room in THE HOUSE THAT DRIPPED BLOOD!"

Funnily enough there's not a single drop of blood in the film. The film's PG rating is quite appropriate as it doesn't rely on blood or sex to sell the picture. It takes a capable cast a few tried and true stories and turns it into an entertaining anthology film perfect for a Saturday afternoon. THE HOUSE THAT DRIPPED BLOOD doesn't feature the most original story but it's put together competently and produced with the sort of familiar and comforting form that fans of gothic horror and Amicus specifically can curl up with on the couch and enjoy. THE HOUSE THAT DRIPPED BLOOD is campy at times and creepy in others the perfect balance that will allow long time fans to enjoy time and time again while also being a good stepping stone for younger fans to dip their toes into more serious horror fare that doesn't get to explicit with nudity or violence. Don't let that fool you or turn you off if you haven't seen the film before because I equate THE HOUSE THE DRIPPED BLOOD to a bowl of macaroni and cheese; it's not the newest or most exciting creation but it's something that you keep coming back to over and over again year after year and it's perfect to share with someone.

That's the perfect analogy I think. When you get tired of the big, loud and typically dumb new creations at the latest hipster filled gastropub THE HOUSE THAT DRIPPED BLOOD is a bowl of mac and cheese, it brings you back to your roots.

THE AUDIO & VIDEO
Scream Factory has finally given us the long overdue Blu-ray debut of THE HOUSE THAT DRIPPED BLOOD and while they don't give any insight into the transfer work done to the film it looks excellent and seems to be a pretty recent master and not one that is a decade old. The 1.85:1 anamorphic widescreen transfer features a warm filmic look with excellent detail and color reproduction which are vivid and lively. Black levels are deep and inky with no signs of compression or blocking. Skin tones are natural and healthy with no waxiness. There's no signs of edge enhancement or excessive DNR. The English audio is presented in a DTS-HD mono mix and sounds magnificent. The quality is pleasing the to the ear with no distortions or background noise and the mix is perfect with steady levels and no fluctuations in volume that will have you trying to find the remote over and over.

THE BOTTOM LINE
THE HOUSE THAT DRIPPED BLOOD is a classic of Amicus and I'm thrilled to finally have this chiller on Blu-ray and in such a nice edition. Highly recommended!

THE HOUSE THAT DRIPPED BLOOD is available HERE
Posted by Celluloid Terror (Seth Poulin) at 2:00 AM