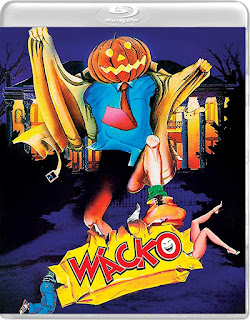 The Film
Thirteen years ago at the Halloween dance several students were murdered by the Lawnmower Killer, leaving survivors scarred and the local sheriff obssessed with solving the crime. With an escaped mental patient on the loose the townsfolk are on edge, or at least they should be, as they fear he may be the killer returning for an anniversary killing. 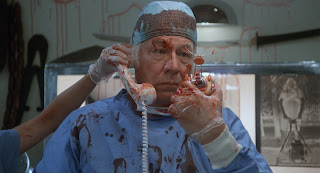 Greydon Clark puts his tongue so far into his cheek that it bursts through, wraps around his head a few times and then comes back and pops his head off in a bloody mess. Then Joe Don Baker's Dick Harbinger comes in and runs his finger through mess on the floor and tastes it to confirm that "It's blood." That's the type of silly shit we're working with in WACKO. George Kennedy plays an incestuous doctor who actually has no medical knowledge at all, the pumpkin killer is literally wearing a big pumpkin on their head with a big nose and the entire cast is so over the top that I'm almost absolutely positive Greydon Clark let them all have free reign on their performances as long as they were wacky enough.

You need to have a sense of humor that allows you to enjoy stupid jokes to really love WACKO. It plays up genre tropes to their most cliche and then run those jokes into the ground to the point where I found myself chuckling along but it seemed to be more out of habit than genuine laughter by the end. That being said, I did enjoy the silliness and had a fun time with this parody and will certainly find myself enjoying it again in the future. 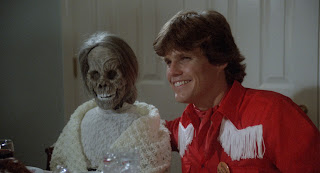 The Audio & Video
Vinegar Syndrome gives new life to WACKO with a new 4K scan and restoration from the original 35mm camera negative for this Blu-ray release. Colors are vibrant and natural with a good depth to them. Detail levels are excellent giving life to the various Halloween costumes and props, not to mention the pumpkin head.  and black levels are deep and inky. There's no damage to the source material to speak of. The 1.0 DTS-HDMA mix presents the audio in a HD mix of its original format. The track is a pleasant listening experience with only intermittent hiss or buzz popping up in the background. Otherwise the mix is crisp full bodied enough to offer up some punch when needed. 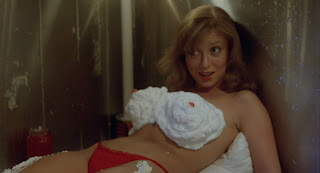 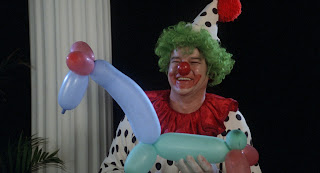 The Bottom Line
Vinegar Syndrome dredges up another video store era obscurity and gives it the royal treatment. If you like your horror filled with yuck yuck yucks you'll find some good laughs in WACKO

Posted by Celluloid Terror (Seth Poulin) at 12:55 AM