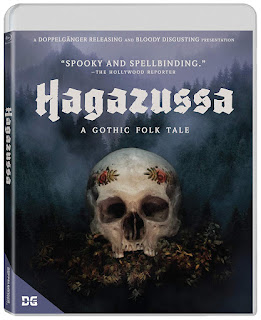 The Film
The film's subtitle "A Heathen's Curse" sums up HAGAZUSSA quite well as we follow a young woman in the 15th century Austrian Alps who has had grown up with darkness surrounding her. Now she lives alone with her baby in a small hut and begins to be tempted by the dark magic that has spread fear and paranoia across the landscape for ages.

HAGAZUSSA comes from German director Luka Feigelfeld who creates a deliberately paced, slow burn atmosphere piece that some might find to be detached but I think almost every scene is delivered with purpose even when it seems nothing of note is happening, it's all calculated. The photography in HAGAZUSSA is largely composed of static shots that somehow perfectly capture the majesty, seclusion and power of the Austrian Alps setting, almost managing to turn the setting into a character itself which can become overbearing on its inhabitants, especially our lead Albrun (played wonderfully by Aleksandra Cwen).

There will undoubtedly be comparisons drawn to Robert Eggers' 2015 film The Witch which featured a similar story set in 17th century New England along with a similar slow burn pace and priority on atmosphere and mood with a well thought out set of more intense visuals to add a powerful punch. Those comparisons are completely warranted but make no mistake, HAGAZUSSA is not a cheap ripoff. Lukas Heigelfeld spent too much time crafting a beautiful production, filled with Oscar worthy art direction and a droning score that creeps into you deeper and deeper as the film moves along to call this a ripoff. The film also served as Heigelfeld's final work for film school and if he was interested in ripping off an already popular story he could have picked something that would have been easier to pull off than a very deliberately paced period pace set in the Austrian alps.

I feel that HAGAZUSSA is a couple key iconic scenes away from being in that true upper echelon of modern horror masterpieces but it is a textbook example of minimalistic horror how to build tension over a long period of time and slowly descend a character into madness. I hope to see more from Lukas Heigelfeld very soon.

The Audio  Video
Doppleganger Releasing gives HAGAZUSSA a home on Blu-ray in the US with a beautiful release featuring a 2.39:1 anamorphic widescreen ratio which retains the films original aspect ratio. The picture quality is tested from one end of the spectrum to the other and always comes out looking strong. The black levels are very deep and free of any crush or blocking while the bright whites of the snow covered alps are properly dazzling but never begin to burn too hot. The lush mountainside forests and cabin settings all look incredible, showing very fine and subtle details in textures and surfaces, especially in interior settings. Audibly, the film is presented in the film's native German language with optional English subtitles in a subtly robust 5.1 DTS HD Master Audio mix that may not immediately blow but once you realize just how many many layers there are to the sound mix in this and how it penetrates you from all angles in an under-the-radar fashion I realized how great the audio on this disc is. The subtitles are timed and translasted perfectly as well.

The Bottom Line
HAGAZUSSA is destined to divide audiences but those who enjoy art house horror and atmosphere over jump scares will find a slice of Euro horror excellence.

HAGAZUSSA is available HERE
Posted by Celluloid Terror (Seth Poulin) at 7:28 AM