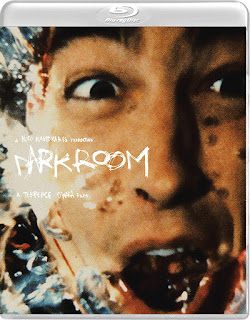 The Film
It's no secret that by 1989 the slasher genre was dying and the well of ideas was dried up. It seemed that anything coming out at this point was a tired and uninspired retread of movies from years prior so whenever I watch one of these end-of-the-line slashers I always hope there's something that will set it apart. When I saw that DARKROOM was produced by Nico Mastorakis I became a bit more intrigued. I haven't always loved Mastorakis' work but I tend to at least find it interesting. Then the opening credits hit and I saw the creativity and care they put in to the credits that maybe I was stumbling on to something different. 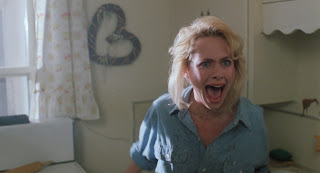 Nope. What a fake out those opening credits were. As soon as the stylish credits designed to look like photos being developed in a darkroom (see what they did there?) end we're introduced to Janet who is returning home to her family's farmhouse from college but the reunion is interrupted by a mystery killer who takes pictures of his victims before killing them. Family secrets are revealed as the bodies pile up and the reveal of the killer's identity takes some twists and turns before all is said and done.

DARKROOM's biggest asset is that it is a sharp looking film that looks like a class above most slasher films of this period and has some decent special effect and kill moments. Unfortunately the story is all too familiar territory. The attempts at red herrings to throw the audience off the trail of the killer are uninspired and comes off as convoluted. Performances are passable and the movie is entertaining enough to fill up its 85 runtime but there's simply nothing to set it apart from dozens of other body count films from the same year and I bet that in a couple of weeks everything about this movie will be a blur of slasher tropes that I won't be able to separate from the other movies it failed to set itself apart from. This is lazy rainy afternoon entertainment and nothing more unfortunately. 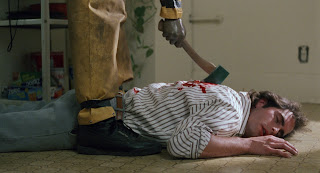 The Audio & Video
Vinegar Syndrome has brilliantly restored DARKROOM with a new 4K scan from the original 35mm camera negative and this disc really looks exceptional. Colors are bright and vivid and skin tones are healthy with a natural fleshy look. Finer detail including surface textures and fabrics shine while black levels are deep and free of any issues with blocking or compression. A 5.1 DTS-HD Master Audio mix gives the audio a strong and well balanced mix across all channels. The sound is crisp and clear and free of any distortions or background noise. 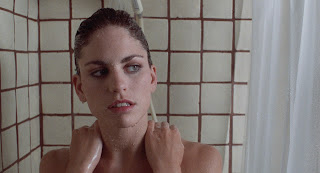 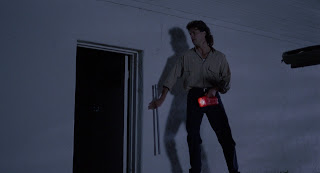 The Bottom Line
DARKROOM is a mixed bag that is a product of the end of the slasher genre that had mostly dried up by the time it was made. Slasher maniacs take note but don't expect a long lost classic of the genre.

DARKROOM is available HERE
Posted by Celluloid Terror (Seth Poulin) at 1:20 AM