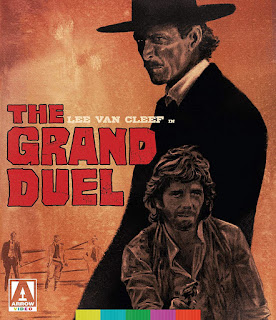 The Film
After previously working as Assistant Director to the incomparable Sergio Leone on the best films the genre has to offer Giancarlo Santi would get a chance to make his own western with a screenplay by the great Ernesto Gastaldi featuring Lee Van Cleef in a starring role as a sheriff named Clayton who is tailing an outlaw named Philip Wermeer (Alberto Dentice) who is on the run from a gang of bounty hunters after the $3,000 bounty on his head for the murder of the leader of Saxon City, a crime he may or may not have committed.

Giancarlo Santi wisely chose Lee Van Cleef to anchor his cast as he not only worked with him previously on the film's where he was the AD but Van Cleef is one of the absolute giants of the spaghetti western genre. He's a familiar face that could offer talent and marketability. As expected, Lee Van Cleef is rock solid in his stoic and calculated performance, providing a paternal role to Alberto (credited as Peter O'Brien) Dentice"s frantic performance that is reminiscent of a troubled teen on the run. The relationship and dynamic between these two characters is the foundation THE GRAND DUEL is based upon and a big part of the reason why the film works so well.

There's no shortage of action with exciting shootouts and gunplay and some cat and mouse games to boot all of which are accented by Luis Enriquez Bacalov's score. Bacalov may not have the name recognition of Ennio Morricone but he's no slouch, having won an Academy Award for his original score on Il Postino in 1996 and putting his musical flourishes on spaghetti western giants such as Django and A Bullet For The General. Bacalov's main theme for THE GRAND DUEL would later be used by Quentin Tarantino in 2003's Kill Bill. Santi adds his own flourishes with a series of flashback scenes shot in black and white that have a dreamlike quality to them. The rest of the film has a good look to it as Santi obviously picked up some tips and tricks from his years spent with Leone and while he may not be up to par with Leone he proved that he could make a really good western on his own.

THE GRAND DUEL has themes and ideas that can be traced back to many previous westerns, but by 1972 what spaghetti western couldn't? I'm not going to knock it for borrowing ideas and themes when it uses them productively and wisely to make a finished product that is engaging, exciting and just plain good. THE GRAND DUEL isn't a definitive entry into the genre but it almost acts as a melting pot of ingredients taken from those hallmark titles and talents involved to create something entirely worth seeking out.

The Audio & Video
Arrow Video has given THE GRAND DUEL a new 2K restoration from the original 35mm camera negative which has given way to a fantastic presentation that easily trumps the film's previous Blu-ray release which featured a passable HD transfer. This new 2.35:1 anamorphic widescreen transfer boasts a properly hot and sweaty looking picture quality with strong colors and deep black levels. Detail is strong from the wood building construction to the dusty exteriors there's no missing finer details. There are a handful of flashback scenes filmed in black and white and they fare very well with a stark look and those deep black levels getting to show off properly. A few scenes are in a bit rougher shape and lead to a softer look and a shift in color tone. Thankfully these moments are minimal and don't take away from the otherwise beautiful presentation too much. This release offers uncompressed mono LPCM tracks in both English and Italian with newly translated subtitles. I went with the English track on my viewing through the film and I was very happy with how this disc sounded. The mix is stellar with a proper balance between the score and dialogue. The sound is crisp, extremely pleasing to the ear and free of any distortions or imperfections.

The Extras
-Audio Commentary by Stephen Prince
-"An Unconventional Western" - Interview with director Giancarlo Santi
-"The Last Of The Great Westerns" - Interview with writer Ernesto Gastaldi
-"Cowboy By Chance" - Interview with actor Alberto Dentice
-"Out Of The Box" - Interview with producer Ettore Rosbach
-"The Day Of The Big Showdown" - Interview with assistant director Harald Buggenig
-"Saxon City Showdown" - Featurette appreciating the film by Austin Fisher
-"Two Different Duels" - Comparison between the original version and an extended German cut
-"Marc Mazza: Who Was The Rider On The Rain" - A video essay about the actor by Mike Malloy
-Original Italian Trailer
-Original International Trailer
-Image Gallery
-Booklet

The Bottom Line
THE GRAND DUEL is a wildly exciting entry in to the spaghetti western genre and is appropriately represented with this outstanding release from Arrow Video. This release is packed, stacked and jacked and you should saddle up and add this to your collection ASAP.

THE GRAND DUEL is available HERE
Posted by Celluloid Terror (Seth Poulin) at 3:08 AM