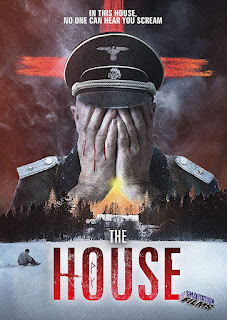 The Film
Set during the second World War, a pair of German soldiers are escorting a POW through a Scandinavian Forest when they find a seemingly abandoned house to rest in, seeking refuge from the harsh winter weather. Shortly after entering the house they quickly begin to see things, hear things and feel like they're being attacked

THE HOUSE looks like a million bucks. Reinert Kiil's direction paired with the cinematography of John-Erling H. Fredriksen gives the movie a visual quality that raises it above the standard independent horror look where you can usually tell that equipment and/or budget wasn't there. The frozen landscape and eerie, shadowy interiors of the house have a moody atmosphere that does provide a bit of foreshadowing to more sinister events that may lie ahead.

Those events do come. Sort of. The horror is held back, with quick bursts giving the audience a glimpse of what could be until the big sequence which is just rather unimpressive and feels like a retread of things we've seen countless times before. And all of this meandering around the house between the occasional shot of shock or scare simply wastes a couple excellent central performances. Even big budget Hollywood horror films struggle to find performances at this level but they're just not given anything to do for the majority of the film. That is the long and short of THE HOUSE, it has a lot of talent in front of and behind the camera but the script is lacking anything even resembling interesting.


The Audio & Video
This DVD release from Artsploitation Films look very good for a standard definition offering. The anamorphic 2.35:1 widescreen transfer features whites that are bright without ever appearing too hot while black levels are deep. The picture is clear but maintains that overcast wintry look that makes up so much of the movie. The 5.1 Dolby Surround audio mix is presented in a mix with optional English subtitles. Optional English subtitles are presented for the film as it features a mix of German, Norwegian and English. The audio is well mixed and sounds pleasing to the ear while the subtitles are translated and timed well.

The Extras
Special features include a short behind-the-scenes featurette, short film from director Reiner Kiil, an audio commentary track and an interview with writer/director Reinert Kiil.

The Bottom Line
I think THE HOUSE is skillfully shot and features great performances but is simply and sadly boring as sin.

THE HOUSE is available HERE
Posted by Celluloid Terror (Seth Poulin) at 2:15 AM