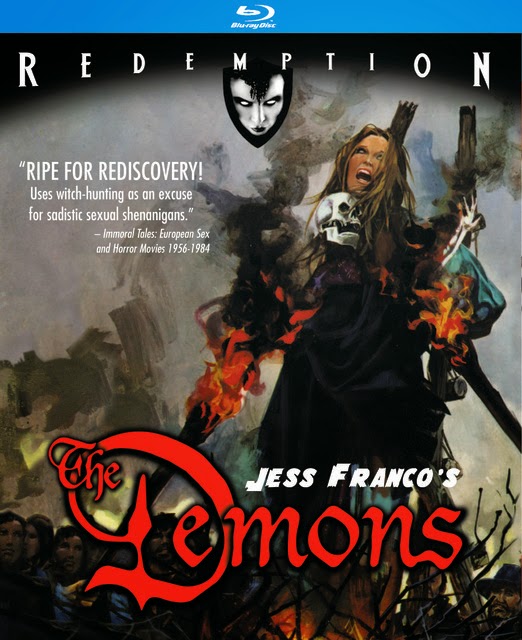 The Film
In 1971 Ken Russell released his masterpiece The Devils on the masses. Viewed as disturbingly sexual, violent and obscene it was banned or faced tight censorship just about everywhere. Russell's film was heavy with commentary on the Catholic church and organized religion as a whole, filled with images of naked nuns, harsh violence from church officials and general insanity. It didn't take long for other filmmakers to capitalize on the attention being given to The Devils and make similar films. Jess Franco did just that in 1973 with THE DEMONS.

During a witch hunting craze, an accused witch who is being burned at the stake accuses the head with hunter and his followers of being in with the devil. This sets off a crazy chain of events, where nobody is to be trusted. A series of tests is given to the accused which will point out the witches. These tests are of course designed to be passed (rather, failed) by everyone they're administered to. The manhunt for the accused goes wide when the witchfinder falls in love with a nun who ran away to escape persecution but there will be no shortage of people being burned at the stake. Or nudity. Or witchcraft.

It goes without saying that based on the title and a short plot synopsis that Jess Franco knew what he was doing with THE DEMONS. He was making a sleazier and more self indulgent film for the exploitation crowds to love on the back of Ken Russell's noteriety. This isn't a new practice and one that hasn't shown any signs of slowing down. Franco's film is wildly entertaining, there's sex, torture, violence and bizarre witchcraft that turns people into skeletons! It has none of the social commentary or expert filmmaking that Russel's The Devils has (that isn't to say it is a poorly made film because that isn't the case). It is simply a exploitative ripoff of a true masterpiece of cinema and is a film worth viewing in its own right.

The Audio & Video
Kino Redemption has done a fantastic job with their release of THE DEMONS. The 2.35:1 anamorphic widescreen transfer features a crisp and largely very clean transfer. Detail is strong with the period clothing and set pieces and the plentiful amount of skin on display is warm, and natural. Everything looks great and there is no edge enhancement or DNR on display. The French (with German) 2.0 audio track features optional English subtitles which are flawless. The sound itself is perfectly mixed, and free of any background noise.

The Bottom Line
Jess Franco has made a highly entertaining piece of nunsploitation with THE DEMONS and this gorgeous Blu-ray is the only way to see the film from now on.

THE DEMONS is available HERE
Posted by Celluloid Terror (Seth Poulin) at 2:03 PM