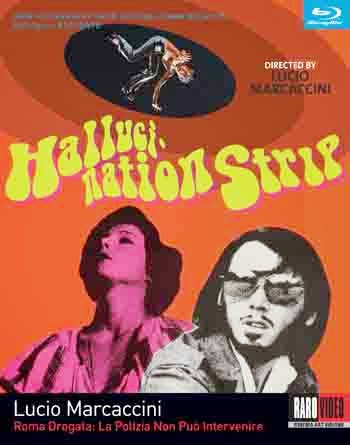 The Film
Bud Cort stars as Massimo, a politically involved student who is big in protests and demonstrations, and being a bit of a trouble maker. When he steals a very valuable tobacco box he becomes involved in a dangerous hunt between the police and the mafia. While he and his friends do drugs, bitch about the system and live their lives, Massimo is becoming increasingly closer to losing his.

To put it simply, HALLUCINATION STRIP is a let down. A film drenched in social commentary still needs to be a successful film or the message is lost. HALLUCINATION STRIP is pretty poorly written and most of the actors seem to be going through the motions. There's an interesting LSD trip scene and a handful of other interesting moments but overall the film isn't good, any social commentary gets lost in the shuffle because of it and you're better off finding better pieces of Euro crime or psychadelic cinema.

The Audio & Video
Raro Video's 1.85:1 anamorphic widescreen transfer looks pretty nice. The transfer has a natural grain structure and nice color representation. Flesh tones and detail levels are good. The only downside is that dark scenes do have a bit of compression but nothing serious. No DNR or EE is noticable. The 2.0 Italian audio track sounds very good and the English subtitles are translated and timed perfectly. There is no background noise.

The Bottom Line
While it didn't strike a chord with me it is worth a rental to see if it strikes one with you.

HALLUCINATION STRIP is available HERE
Posted by Celluloid Terror (Seth Poulin) at 11:58 AM