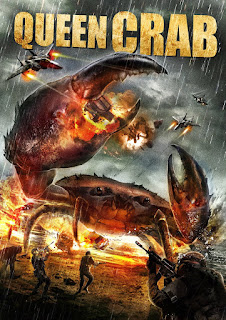 The Film
"looks like a bulldozer went through it"
"some kind of cult"
"yeah, one of those bulldozer cults you keep hearing about"

You may know what you're in for with a dialogue exchange such as that. QUEEN CRAB is the story of a sleepy country town that is being plagued by a giant crab that was awakened when a meteor crashed into a local lake. The town must find a way to stop this mammoth creature before she tears apart the entire town and her eggs hatch.

A throwback to giant creature feature films of the 1950s, QUEEN CRAB is a schlocky B-movie through and through. The acting is either stilted or totally overblown and I doubt the writing had more than a single draft. Director Brett Piper has worked exclusively in low budget content such as this so he is no stranger to fare such as this but is still far from a skilled filmmaker. The entire thing is rough around the edges (to be kind) and to be realistic I should just rip the thing apart from every angle. 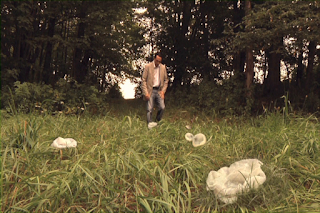 But I won't. QUEEN CRAB ends up being a mildly entertaining movie to toss on during a night of beers and just laugh along with how inept it is. I love that they chose to use stop motion animation for the giant crab but it's not particularly well done. A for effort though.

I caught QUEEN CRAB when I was in the right mindset - I was in a good mood, having fun drinking and had already had plenty enough to drink. Some movies need some sort of substance to make them fun and QUEEN CRAB is one of them. So kick back, toss back a shot and crack a beer and enjoy the giant crustacean madness!

The Audio & Video
Wild Eye Releasing delivers QUEEN CRAB on DVD with a transfer that is as good as it's going to get. Filmed on low quality digital equipment QUEEN CRAB doesn't look impressive but it gets the job done. Colors and detail are decent but compression is a bit rough at times with artifacts throughout. Thus is the nature of low budget filmmaking. The stereo audio mix is fine, with no damage to mention and a solid mix between the two channels. 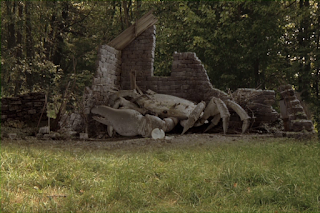 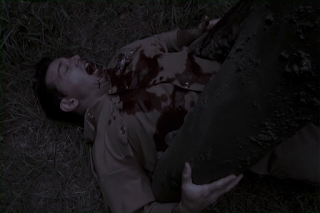 The Bottom Line
Yes, it is incredibly low budget and no it technically isn't very good but there's a bit of a charm to the whole thing with its stop motion and shitty effects. There's got to be a drinking game or 3 that can be made out of this one.

Sounds like something right up my alley may have to look for this one.

Amazon and Wild Eye's Website both have it available