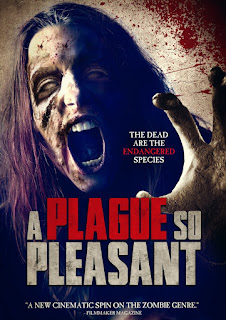 The Film
After a zombie apocalypse that lasted a mere 12 hours before zombies stopped attacking and humans stopped shooting the world is now forced to live among the walking dead as they're protected beings kept in enclosed areas as a sort of walking cemetery. Life is decidedly different with the dead living among us even when they aren't trying to eat our brains... until they decide to eat our brains again.

A PLAGUE SO PLEASANT is an interesting take on the zombie genre in an overly politically correct age where everything offends somebody and everybody thinks their opinion matters. It isn't too hard to believe there would be a group rallying for zombie rights in the event of an actual zombie apocalypse. As the dead walk freely among the streets and in gated "living graveyards" some people can't beyond the loss of their loved ones and others can't stand having to deal with this protected species. 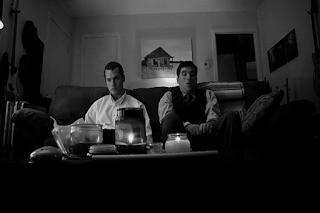 A PLAGUE SO PLEASANT has an interesting idea of a man who shoots down the corpse of his sister's ex-lover after she shoots down his best friend's attempts to woo her. This shooting once again sets off the zombies lust for blood and the film quickly becomes an attempt to survive. The film's tone shifts drastically once the zombies begin to attack, going from a thoughtful movie with a fresh take on an idea that has been explored before with characters we could have grown to care about. The movie even shifts from black and white to color at that moment which isn't only unnecessary it also exposes a lot of the film's shortcomings due to its miniscule budget which makes it feel like any other direct to DVD zombie movie of the past decade.

A PLAGUE SO PLEASANT could have been wildly successful as a short film. The entire second half of the film is running away from zombies and that's it. It becomes painfully redundant and boring and filled with inconsistencies and holes in logic but take the idea the film originally presents and sadly jumps away from to add the horror element that sells DVDs would have been an interesting character piece about the relationships of the living with the living and the living with the dead.

The Audio & Video
Wild Eye Releasing gives A PLAGUE SO PLEASANT a home on DVD with an anamorphic widescreen transfer that looks just okay. The movie has very modest production values so it is no surprise the movie doesn't look great on disc but it doesn't look awful. It's a totally watchable transfer that looks better when the movie switches to color from black and white which suffers from some artifacting. Colors are decent and black levels are fairly deep. The stereo audio is a solid effort with a clean track free from any distortions and a passable mix. Dialogue gets a bit muddled at times but not to the point where you can't understand the characters. I can't fault Wild Eye for not delivering a better A/V presentation, the movie is only going to look and sound as good as it is going to look and sound and I think this is pretty much it. 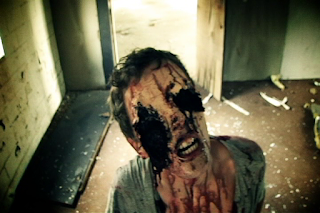 The Extras
A pair of trailers are included for the film. 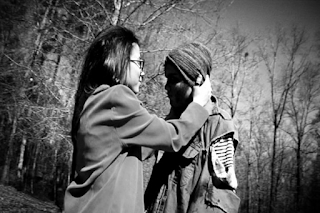 The Bottom Line
A PLAGUE SO PLEASANT seems like the filmmakers were scared to make the movie they wanted to make in its entirety and instead felt the need to tack on half an hour of crappy zombie chase scenes that add absolutely nothing to the movie and only detract from an interesting original idea.

A PLAGUE SO PLEASANT is available HERE
Posted by Celluloid Terror (Seth Poulin) at 4:38 PM