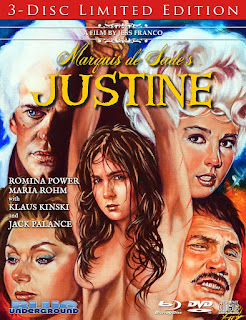 The Film
Justine and her older sister Juliette are left orphaned after their father is forced to leave the country and their mother dies and are removed from their convent where they're training to be nuns. The sisters quickly take different roads in life as Juliette shacks up at a brothel and takes to a life of crime while Justine clutches on to her innocence and virginity while she's put through trial of physical and sexual abuse and torture, framed for murder, forced into a gang of fugitives just to name a few as told by the Marquis De Sade himself.

JUSTINE is Jess Franco's biggest production and it certainly feels and looks like it with lavish costuming, big sets dripping with gorgeous dressing and a substantial amount of locations and cast members. The film looks beautiful and despite a few "Franco being Franco" moments (including a needless quick zoom to a totally out of focus eyeball) this is a stylish and skillfully made production. Unfortunately the star Romina Powers is either totally disconnected from the material or blissfully (for her own sake) unaware that she's making a movie. She has a perfect look for the character of Justine as she has a naturally innocent look but she's as wooden as wooden can get and doesn't emote any of the tasteless brutality that she endures again and again. 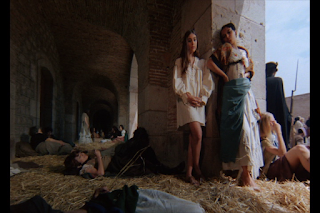 The script can be blamed for that however as much of the straight forward mean spirited nature the original story has toward Justine is lightened and there is a moment of reprieve for Justine in the film where she meets a man who has a genuine love for her and wants to protect her. It leaves the film being a bit uneven and awkward at times. Jack Palance and Mercedes McCambridge play supporting roles who both kill it with their respective performances. As the story goes Palance was drunk on red wine by 7am each morning and that very well may have lead to his totally bizarre and off the fucking wall performance while McCambridge owns the screen during her scenes as a powerful leader of a band of thieves and swindlers. If Romina Powers had half the charisma or talent as McCambridge she could have won an Oscar for this film. The film still succeeds in adapting the De Sade story, with a performance from Klaus Kinski himself as the author locked up in a prison having hallucinatory visions of naked chained women bleeding from their necks and covered in sweat.

JUSTINE is worthy of praise as the good certainly outweighs the bad and will live on as one of Jess Franco's most attractive and lavish productions. It makes me think about how incredibly some of his horror films could have looked and how big their scope could have been had he had the budget he had on JUSTINE.


The Audio & Video
Blue Underground takes what is arguably Jess Franco's most visually stimulating and lush production and give it the Blu-ray release it deserves with a stunning anamorphic widescreen transfer keeping the film's original 1.66:1 aspect ratio. Colors are vibrant and vivid while there is excellent detail level in textures and surfaces. You can almost feel the scratchiness of the wool garb! Skin tones are fleshy and natural with no signs of waxiness or excessive digital scrubbing. The film's natural grain structure is kept gracefully in tact and there's really nothing that could have been done better on this disc from a visual standpoint. And the English DST-HD mono audio is largely the same with a crisp and clear track that is free of any background noise or distortions. The dialogue and beautiful score from Bruno Nicolai are beautifully complimentary and have a great mix.

Please Note: Screen shots are taken from the DVD copy of the film and do NOT represent the quality of the Blu-ray transfer. 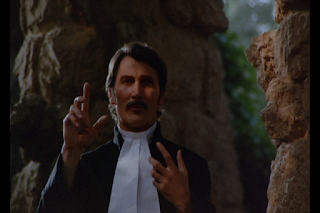 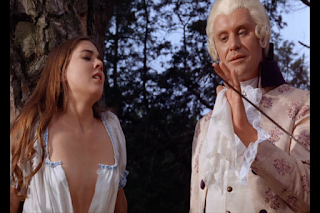 The Bottom Line
This period piece adapted from the story of the same name is sometimes sleazy, sometimes excellent and sometimes a misfire. Those misfires are quickly followed up by more sleaze and excellence most of the time which lands JUSTINE as a perhaps under appreciated piece of Franco's filmography and one that will hopefully gain some attention from this gorgeous Blu-ray release.