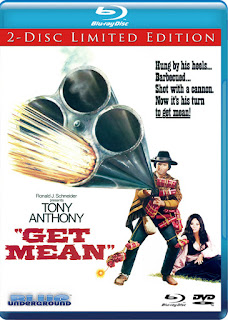 The Film
When a cowboy gets dragged by his horse into a deserted ghost town he meets a gypsy family that offers him a fortune to return a princess back home to Spain but upon getting to Spain he's immediately thrown head over heels (and heels over head!) into a war between barbarians, vikings, the Moors and must complete an epic quest to receive any of the money promised to him.

In one of the more bizarre and unexpected plots a movie has ever thrown at me, I'm not entirely sure what to make of GET MEAN. Tony Anthony reprises his role of The Stranger for the fourth time in a film that would get shelved for decades. There's no need to see the previous Stranger films to be able to perfectly follow along. Well, as much as you can follow this bizarre mish mash of spaghetti western, sword and sandal peplum film and Looney Tunes cartoon. 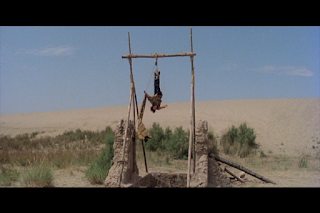 GET MEAN is entertaining in its absurd and comical presentation filled with oddball characters including a Shakespeare-reciting warlord and Indiana Jones esque adventures. It's a well made film from director Ferdinando Baldi who made his living skipping from genre to genre with the changing of fads in film. He directed another spaghetti western in the Blue Underground library, Texas Adios, along with the underrated Django, Prepare A Coffin. He would again collaborate with star Tony Anthony, who plays quite the opposite type of lead from Clint Eastwood or Franco Nero, in 1981's Comin' At Ya! and 83's Treasure Of The Four Crowns which were big parts of the 3D revival.

GET MEAN was a bit of an experiment hoping to be able to take a successful western hero out of his natural habitat that was at the end of its cycle and faced severely declining ticket sales, and put him in other exotic locations and adventures selling tickets solely on The Stranger name alone. Admittedly the idea failed and that was the end for The Stranger. At least now we're able to see the anything goes, more is more (except the budget, though you wouldn't know from watching) bizarre production that is GET MEAN. 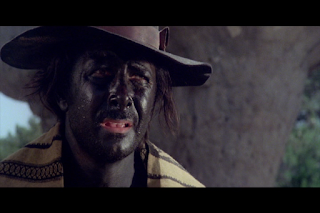 The Audio & Video
Blue Underground delivers GET MEAN on Blu-ray with a full 1080p HD, 2.35:1 anamorphic widescreen presentation. Overall picture quality is very good with a healthy grain structure giving the movie a natural film look. The picture is clean with little to no speckling noticeable. Detail level is good and at times great, while colors are natural without appearing too hot. The PQ can best be described as "natural". The English audio is delivered through a mono DTS-HD track that sounds great most of the time. Early on in the film there's a bit of damage to the audio likely from the source material and not from the work done on the Blu-ray. Otherwise the mix is great and levels are steady with a crisp and clear soundtrack throughout. 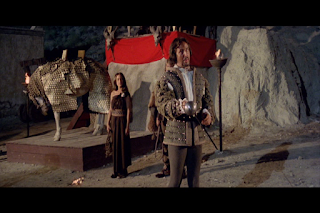 The Extras
-"Tony & I": An interview with director Ferdinando Baldi (8 Minutes) - Baldi briefly discusses his history with Tony Anthony and their friendship and love of cinema including how Anthony played a big role in reviving 3D in the 1980s.
-"The Story Of The Stranger": Interview with producer and star Tony Anthony (23 Minutes) - A new interview with Tony Anthony as he discusses GET MEAN for the first time ever in an interview along with other career anecdotes.
-"Looking For Richard": Interview with co-writer/star Lloyd Battista )(12 Minutes) - A lively sit down with Battista who delivers stories of his time making movies with his friend Tony Anthony and how the movies were made
-"Beating A Dead Horse": An interview with Executive Producer Ronald J. Schneider (10 Minutes) - Stories of trying to get GET MEAN financed after the spaghetti western market essentially crashed. This is especially interesting for those interested in the inner workings of getting a movie made from a financial standpoint.
-Deleted Scenes
-Theatrical Trailer
-French Trailer
-Radio Spots
-Poster and Still Gallery
-Booklet with essays on the Stranger film series by Howard Hughes
-DVD copy of the film 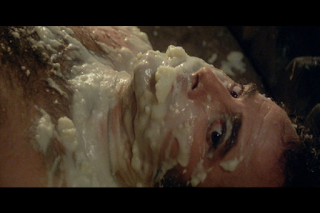 The Bottom Line
I'm not sure how they pulled it off but GET MEAN is one wild entertaining ride that could have easily been a total disaster. Credit is due to the cast and crew for making a crazy movie and to Blue Underground for rescuing this film from obscurity and securing its safe place in genre film history with a great BD presentation.

GET MEAN is available HERE
Posted by Celluloid Terror (Seth Poulin) at 3:35 PM