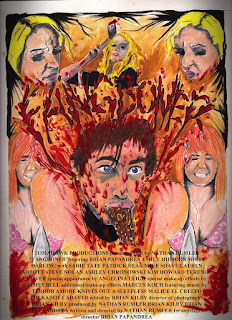 There are two types of people in this world. Those who ask "Why would you watch a movie called FANGBONER?" and those who ask "How could you not?". Fortunately, I'm in the latter camp. FANGBONER is a very difficult movie to describe, but I'll attempt it. FANGBONER begins with our main character Dick waking up from a hard night of partying only to find that his member has been mutilated. He soon comes to the conclusion that he and a woman he's been seeing have been infected with a form of vampirism which requires them to feed off of the genitals of their victims. After coming to terms with their new disease, they go about trying to find unsuspecting people to feast upon, unaware that they are being tracked by the extraterrestrial originator of their terrible condition. 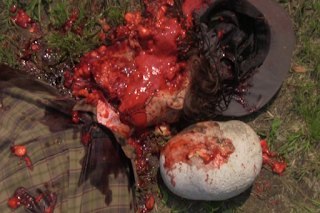 FANGBONER could easily have been an awful experience. It's a very low budget film and it shows. The dialogue is awkward, the actors' deliveries are sometimes painful, and the whole movie has a very cheap look to it. Yet, FANGBONER somehow exudes a charm that shouldn't be possible for a dick-joke filled film of it's caliber. The movie is filled with an array of characters that while sometimes bizarre, are never boring. And the soundtrack (featuring bands such as Polkadot Cadaver and Knives Out) is pretty darn good. At several points, I found myself either laughing out loud or wincing at the gore on the screen. I even watched the film twice before I wrote this review. FANGBONER is obviously not a film for everyone, but if you enjoy a hefty side of cheese with your gore you should definitely seek it out. 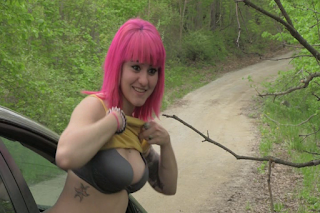 Todd from all things horror checking in. I want to find this movie.

Hey, Todd. Writer/director here. You can order a copy at fangboner.storenvy.com. We'll be closing our Storenvy account pretty soon though and have an actual website set up in it's place. Thanks!