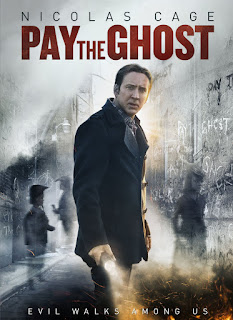 The Film
Mike Lawford (Nicolas Cage) and his wife Kristen (Sarah Wayne Callies) have had their lives and marriage fall apart over the last year when their son Charley went missing at a Halloween carnival near their home in New York City. As Halloween approaches again they begin to see ghostly images of Charley and reconnect in hopes of figuring out the strange occurrences and finally finding their son but they quickly find out that their journey is going to bring them head first into a centuries old Samhain curse.

PAY THE GHOST doesn't deviate too far from what you'd probably expect this movie to be. It's filled with Nicolas Cage making ridiculous facial expressions, some cliche horror movie moments often done with questionable CGI, a Nic Cage freak out, and a few moments that are really pretty good. The Halloween carnival scenes are short but really capture an dangerous and creepy atmosphere. The scenes with Nicolas Cage literally crossing over to the other side are beautiful in scope and look larger than life. 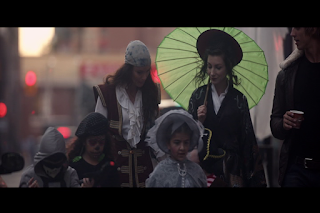 The third act becomes a less polished version of Insidious for better or worse. I've seen the first two Insidious films and am not at all a fan of them but the path PAY THE GHOST took didn't bother me with it's striking simularities to those films at times, perhaps because I don't think PAY THE GHOST could have been anything more than it already was and comparisons to a disappointing and vastly underwhelming hit franchise.

The Audio & Video
RLJ Entertainment deliver PAY THE GHOST on DVD with a 2.35:1 anamorphic widescreen transfer that features an intentionally cold color palette heavy in greys and washed out hues adding to the style and feeling of the film. Picture quality is good with just a few trace moments of blocking during the scenes with heavy black levels. The English audio comes in with a Dolby Digital 5.1 mix that sounds fine. There's not an awful lot going on to give your sound system a workout but the dialogue and soundtrack are always mixed very well and levels are steady. 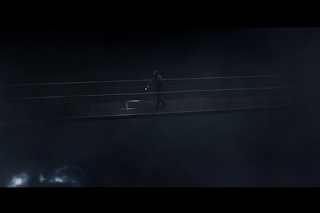 The Extras
Someone didn't pay the ghost enough to get special features. 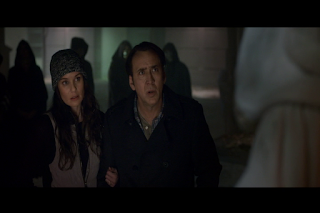 The Bottom Line
Decent acting, a signature Nic Cage spazz out, a couple striking visuals are the high points for an otherwise middle of the road horror thriller that may have overachieved in even being that.

PAY THE GHOST is available HERE