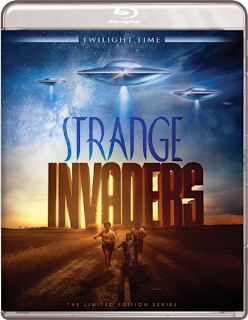 The Film
In 1958 a race of aliens land in small town Centerville, Illinois and take control of the town, posing as normal human citizens. Fast forward to 1983 and a professor goes to Centerville looking for his ex-wife and discovers the town is stuck in 1958 and is home to some sort of beings not of this world. After narrowly escaping with his life the professor sees a photo of the aliens in a tabloid and he and the tabloid editor quickly become the target of these aliens and return to the town to find the truth.

STRANGE INVADERS is a love letter to the sci-fi invasion flicks of the 1950s by way of the special effects driven B-horror movies of the 80s. Clunky in its presentation, the film feels choppy in its editing. The story is a simple and effective one but suffers from a rather unsatisfying ending. Add in the wooden acting from everyone involved and STRANGE INVADERS really could be a total disaster but it has an endearing charm about it that helped me overlook many of its problems similar to those space invasion movie it is paying homage to.

The best part of STRANGE INVADERS is how well done the effects and art direction are. This movie is colorful with beautiful hues of pink, blue and purple all over the place and the makeup and special effects are expertly crafted. The design of the alien is memorable, fitting in with the color scheme perfectly and the numerous skin ripping scenes are eye popping and have just enough gross out factor to make it something special.

Unfortunately even the best parts of the movie are plagued by a puzzling decision in the cinematographers decision to use a foggy filter over the entire film which mutes the colors quite a bit. I guess the idea of filter is to add a dreamy quality or perhaps even a nostalgic touch but it isn't attractive and is frankly a bit annoying. STRANGE INVADERS isn't amazing, it relies on its effects and a very basic story to succeed and it does get a passing grade despite many missteps. It would fit nicely among a marathon including similar cheesy horror flicks from the 1980s such as Night Of The Creeps, Night Of The Comet and Invaders From Mars though I think all of those films are superior.

The Audio & Video
Twilight Time releases STRANGE INVADERS with its standard limited to 3,000 copies edition and features a full 1080p HD 2.35:1 anamorphic widescreen transfer. The Blu-ray features a natural film look with nice color reproduction but the film's photographic style dampens the colors affect and fine detail can get lost in wider shots that otherwise may have been there. Twilight Time's disc looks about as good as you could ask for given the film's natural look. The audio is handled with a DTS-HD mono Master Audio track that sounds pristine. There's no damage or background noise present and the dialogue and soundtrack are complimentary. This audio track is all about taking the original mix and making it sound as perfect as it can and not about trying to create fancy new multichannel mixes.

The Bottom Line
Not the piece of classic 80s B-movie cheese I was hoping for but STRANGE INVADERS is still entertaining enough and presented with enough care for me to recommend this limited edition release.