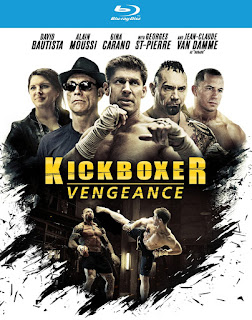 The Film
Eric Sloane is a renowned marital arts champion and in an attempt at making life changing money he agrees to fight in the high stakes world of underground fighting in Thailand. Eric isn't prepared for the  violence that is common in these fights and when he faces the ruthless Tong Po (Dave Bautista) he meets the end of his life. Eric's brother Kurt (Alain Moussi) has a plan to assassinate Tong Po but when that fails he decides to train under the man that trained his brother in a quest to avenge his brother's death.

John Stockwell handles KICKBOXER: VENGEANCE with as much grace as you want out of an ass kicking action movie, that is to say he made me believe that this film is a product of the 80s when action films were arguably at their best. Many of the best parts of 80s action films are present; the training montage, marketplace battles where produce flies, the passionate love scene and the dramatic climax where time seems to slow down. As a director John Stockwell has never really done it for me with his best work dwelling in so-so films or worse but he has won me over with his remake/reboot (however you want to look at it) of KICKBOXER. The movie is most certainly flawed but I don't think that moments of clunky editing and storytelling, largely due to scenes being cut and left on the editing room floor which would have helped better fill a couple of small plot holes and wouldn't have made the movie drag any, hurt the overall product. Stockwell handles the action scenes with skill and doesn't revert to annoying modern tendencies such as shaky camera work or unnecessary slow motion. The fight choreography is fantastic and the use of actual martial artists is not only noticeable but appreciated.

Jean-Claude Van Damme cemented his legacy in films such as Bloodsport, Timecop, and of course the original KICKBOXER and he returns here in the role of the trainer and mentor. Van Damme steps into the role seamlessly which is aided by the fact that he still kicks ass and gets to showcase his stuff. And while I loved seeing Van Damme get to show off his stuff, the man has kept incredible shape, there's no mistaking that the star of this film is without a doubt Alain Moussi. It's immediately apparent that Moussi has that old school action star charisma, that it factor that guys like Arnold, Sly and JCVD were all able to harness and capitalize on. If Moussi finds a way to fully capture that likability and "it factor" he could definitely be the next big action hero. It doesn't help that he bares more than a slight resemblance to a young Van Damme. Moussi is also a legitimate ass kicker, he's not the biggest guy around but he is a black belt in Brazilian Jiu-Jitsu and has worked stunts on X-Men: Days Of Future Past and Suicide Squad just to name a few. Moussi's testosterone fueled quest for revenge is kept in check by Sara Malakul Lane who plays an agent for the Thai police and tries to protect Kurt from being locked up or even worse out on the street. She's the feminine side the movie may not have needed but is certainly better off having.  She portrays her character, Liu, perfectly as smart, cunning, and just the right amount of sexy. I first became aware of her when I reviewed Sun Choke a few months back and was pleasantly surprised to see her here because she's not only beautiful but a fine actress as well.

But no hero is complete without his main foe, right? Guardians Of The Galaxy proved to me that Dave Bautista, known from her on out as Batista, could act because he rarely showed much charisma in his WWE days. And while he's not asked to do as much here as he did in Guardians, he's a really solid big boss type character. Batista is not a small man and he looks every bit as intimidating as you want your big boss to be. His look is a throwback to that of the original Tong Po and he carries the torch well.

In fact the movie as a whole carries the torch well. KICKBOXER: VENGEANCE doesn't re-write what a good action movie is and it didn't have to. It is a remake but it doesn't get too cute with things in trying to be new and different or to make things more slick and polished than its predecessor. Movies like the original KICKBOXER work for a reason and remakes are an inevitable fact in current Hollywood so all we can hope is that they turn out to be a good movie. That is exactly what KICKBOXER: VENGEANCE turned out to be- Just a good old fashioned action movie.

The Audio & Video
RLJ Entertainment delivers this new KICKBOXER chapter with a stellar A/V presentation. The 2.40:1 anamorphic widescreen transfer is very sharp and features strong detail. Colors are vibrant and vivid while skin tones are flehsy and natural with no signs of waxiness. The blood, sweat and tears shine on this disc! The audio is handled with a DTS-HD Master Audio 5.1 surround mix that is strong and crystal clear. English dominates the dialogue but there are a handful of scenes in what I believe to be Thai and those have subtitles that are translated very well but the subtitles are stylized and splashed across various parts of the screen. I'm not a fan of getting crazy with subtitles but it's a minor gripe that doesn't effect the film much.


The Extras
-The Making Of KICKBOXER: VENGEANCE
-Photo Gallery

The Bottom Line
It's not easy to revive a franchise from decades passed and have the film feel like it belongs under the same umbrella as the original films and be a good movie but KICKBOXER: VENGEANCE gets it right. While the film can easily stand on its own it also feels like a KICKBOXER film.