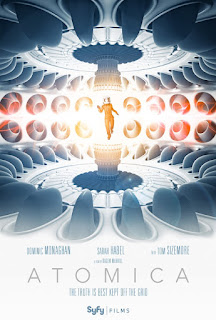 ATOMICA is an isolation thriller set in the not too distant future on a desolate nuclear power plant run by the world's power supplier Auxillisun. Abby (Sarah Habel) is a tech for the company and has been flown in to fix the communication issues present where she meets Robinson Scott (Dominic Monaghan) one of the two people working there. The other, Dr. Zek (Tom Sizemore), has strangely been missing for several days. The events leading up to Abby's arrival and everything she sees and experiences there don't add up but things only get weirder and more deadly when Dr. Zek turns up.

For a film that is being distributed by SyFy Films it has decent production values. Wisely the film is kept mostly to the confines of the power plant's interiors. The sparsely decorated, with only the sporadic computer screen or switchboard, sets add to the feeling of isolation and loneliness which can play tricks on the mind, a theme that the film comes back to again and again despite never really playing into the way things pan out. Even the exteriors which are obviously CGI and green screen aren't bad when there's nothing going on in front of the backgrounds but as soon as action starts happening in the CGI heavy areas it begins to look cheap.

The film doesn't reinvent the wheel but it doesn't really do this style of thriller all that well either. There's too many cases of false identity going on and a few massive plot holes along with subplots that don't go anywhere and are nothing but weak attempts at getting the audience to really gravitate and latch on to a certain character. That said, the cast is actually quite good and do the best with the script they have to work with. If ATOMICA was a wide release, major production I'd be harsher on it but it really isn't too bad when viewed among the ranks of the Syfy channel productions and distributed films. I wouldn't recommend you rush out to see it but if it pops up on a lazy Sunday afternoon you might get more enjoyment out of it than the same 15 year old reruns of COPS.