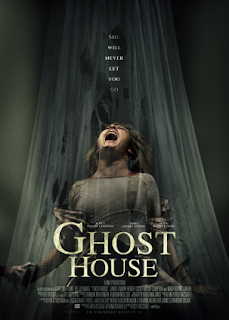 Julie (Scout Taylor-Compton) and Jim (James Landry Hebert) are a young couple taking a vacation to Thailand where they become engaged after Jim proposes. Julie is interested in the local custom of ghost houses which are small house shaped shrines to the spirits and are meant to house troublesome spirits and appease them with candles and other offerings. Julie and Jim meet a pair of young English men named Robert and Billy who show them a good time during the night and promise to take them somewhere special out in the country. When they arrive hours later they trick Julie into taking a piece from an old ghost house as a memento of their adventure and she quickly becomes possessed by an incredibly angry and vengeful spirit who burned to death after finding her husband cheating on her. Local legend says Julie has just a couple of days to rid herself of the evil spirit before it swallows her soul for good.

At its simplest GHOST HOUSE sounds like any number of Asian horror films that saturated the horror market about fifteen years ago and it does share similar traits but it is not just another clone of The Grudge or The Ring. It has a visual style that sets itself apart from the hordes of J-Horror lookalikes. I think the vengeful spirit has a creepy look rendered in black and grey with a menacing face and details like her crooked teeth and slightly sunken in skin. She's seen mostly in short glimpses until the finale where we get a good long look at her and I don't think fleshing it out hurts the design quality. While watching I found myself thinking that this movie looks and feels much more like a version of Sam Raimi's Drag Me To Hell than the standard pale white face, long black hair Asian ghost film of the early 2000s but without the humor Raimi imparted upon his 2009 film. This feeling was cemented when we get to see the evil spirit ecompassed in fire which bore a strong resemblance to a scene out of Drag Me To Hell. It wasn't only the look and feel of the movie but the film shared some key plot points as well including a personal token had to be used to transfer the spirit a coin in DMTH and a piece of scarf here. Even the timeline from initial possession to total loss is almost if not completely the same.

There are worse movies to be compared to than Drag Me To Hell as I found hat movie to be a nice return to form for Sam Raimi with his high energy, slapstick influenced style of filmmaking and it had some great scary scenes and visuals. Unfortunately GHOST HOUSE is like the store brand version of it. It loses all of the humor, which is fine, I think this movie could easily work as a straight forward horror film that goes for intense scares but the excitement is fleeting. Some scenes work and others seem totally drained of energy or passion. Scout Taylor-Compton (Rob Zombie's Halloween) is good in the lead role and shows promising growth and ability. Some of the scenes, such as when she's visualizing their hotel is a burned out hollow shell of itself, still engulfed in flames work toward showing how the spirit is affecting her and then there are other scenes, generally those carried by James Landry Hebert that I found to be unconvincing and tiresome. GHOST HOUSE is a mixed bag in that regard. All too often most of what I saw in GHOST HOUSE just seemed sucked of any real energy. A lesson could be learned from Gogo (Michael S. New) who was a joy to watch and should be commended for his character's loyalty. I sure hope he got a big tip at the end.

I do appreciate that the production feels rather large with several changes in setting from the main drag and hotel in Thailand, to the countryside, a small village, the hospital, an abandoned urban complex (a mall perhaps?) where they meet Reno (Mark Boone Jr.) a sleazy man with power and the knowledge of how to help Julie, and finally the secluded Shaman house. GHOST HOUSE feels like it is sprawled out all over Thailand. Between that and the design of the film I never felt like I was watching a cheap movie. And despite my problems and critiques of the film I also can't say I was ever really bored. I may not have been on the edge of my seat the whole time but I didn't lose interest and thought GHOST HOUSE was a passably entertaining film even if it's entirely too familiar and predictable to be any sort of stand out success. When it comes down to it GHOST HOUSE isn't a total waste of time but it is a forgettable experience.
Posted by Celluloid Terror (Seth Poulin) at 4:46 PM