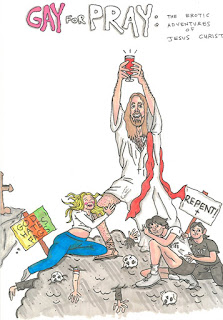 Before I get into the review I want to throw out a quick apology to Nate on how long it has taken me to get this review done. Sorry Nate. Now that the sappy shit is out of the way let's talk about gay Jesus.

GAY FOR PRAY follows a pair of down on their luck roommates who have their lives invaded by Jesus who has been kicked out of heaven by God for being Gay. Without his powers he's masquerading as a wizard until he can get his powers back and that's just what these guys intend to do, even if one is a dickhead Athiest and they have do deal with the town's religious fanatics. 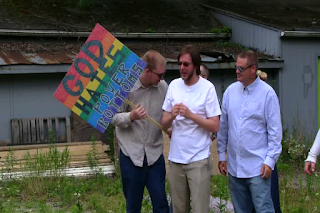 If you're not familiar with Nathan Rumler's previous work or his film company Rock Bottom Video let me give you a bit of a Cliff's Notes on what to expect. Raunchy humor, gore and gratuitous everything. You might be offended and you'll probably laugh. Hopefully you laugh. That's generally the point. If you're offended while watching Gay For Pray well then these movies probably aren't for you and you should lighten up. 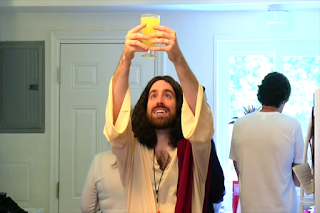 GAY FOR PRAY: THE EROTIC ADVENTURES OF JESUS CHRIST is what you probably think it is. It's low budget (very low budget) and features a small cast, a tight set of locations and actors that aren't exactly award winners. But the cast is actually quite competent and the writing is genuinely funny and at times absolutely hilarious. Nathan Rumler has had GAY FOR PRAY written in one form or another for over a decade and I have to say that the final product was worth the time and effort he put into it. It's consistent in its delivery of laughs and shocks. The film features the most gratuitous shower scenes I have ever seen and then outdoes itself later on in the film and by that point I was close to tears from laughing. 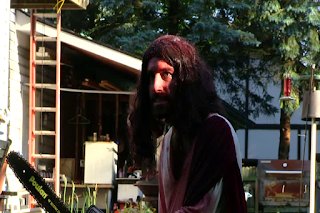 And then there's the gore, which is plentiful. GAY FOR PRAY is not a horror movie but good lord it delivers on the gore and gross out factor. Guts fly, fetuses are born, crosses are fucked. It's a genuinely good time for the whole family (don't show this to the kids). And then there's the scene where Jesus and Judas have a threesome in the desert. Oh you don't remember that from the bible? How about the piss drinking? No? What version are you reading? Maybe the electric chainsaws? Have you even read the bible? Well it's actually a quite entertaining read but this is way shorter and just as crazy. And you'll miss out on all of the penciled on mustache dry humping if you only read the bible. 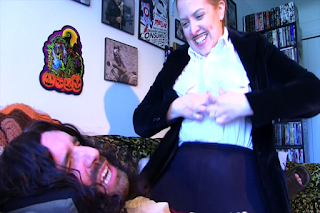 I can spout off every ridiculous thing GAY FOR PRAY has within. I can tell you about each and every erotic adventure that Jesus has in this film and I still wouldn't fully be able to tell you just how ridiculous this movie is and how lovingly crafted it is by everyone involved. If you sit there eating cereal while watching this I bet you'll either sit there with milk spilling out of your mouth while you laugh or you'll throw the bowl at the TV in disgust, and in that case I repeat that you should lighten up. GAY FOR PRAY is far from perfect but it really doesn't need to be. It is exactly what it needs to be. It's raunchy, graphic, stupid, hilarious, and features the greatest closing monologue I've ever seen.