YOR: THE HUNTER FROM THE FUTURE (Mill Creek Blu-ray Review) 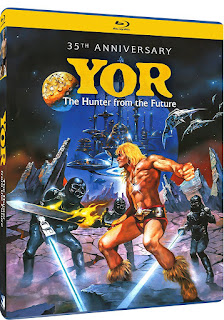 The Film
The early 80s were an odd time for film, especially the lower budget film market that was looking to capitalize on the next big trend. The Italian film market was notorious for latching on to a trend and riding it until it was gasping its last breath (and beyond). Star Wars was still the biggest thing going in 1983 so it's no surprise that there are plenty of ripoffs from the early to mid 1980s. Not all of them were straight forward attempts at a space opera however. Some took "A long long time ago" quite literally like YOR: THE HUNTER FROM THE FUTURE did. "That doesn't make sense" you say? Well, you're right, it really doesn't but then again not much in this slice of delightfully cheesy adventure film does.

Reb Brown (Captain America, The Howling 2) stars as Yor, a great hunter in pre-historic times that rescues Kalaa (Corinne Clery), the princess of a tribe from certain death when she is attacked by a giant dinosaur-like beast. Kalaa latches on to Yor but they're separated when the tribe falls under attack to a tribe of hairy, purple skinned savages. Yor eventually reunites with Kalaa and her caretaker Pag, but has also gained a new follower in Ena who is blond haired like Yor and is getting more of his attention. The group heads toward the desertlands in search of answers as to what the medallion that hangs fro Yor's neck is and find a futuristic army rand by the Overlord who wants to keep Yor from learning of his true origins and identity.

YOR: HUNTER FROM THE FUTURE is directed by Antonio Margheriti (Horror Castle, Seven Dead In The Cat's Eye) who should be well known to Italian genre film fans as he was one of the biggest trend hopping directors of the 1960s-80s. Whatever trend was big at the time you could safely bet Antonio Margheriti was making a movie or two in that genre whether it be the Gothic horror of the early 60s, giallo films of the early 70s or more war oriented fare of the late 70s, Margheriti made them all. And he was no stranger to peplum films early on in his career either which made for an interesting pairing when he returned to the sword and sandal style to mash it up with the sci-fi epics that ruled the box offices when YOR was made. His directing is serviceable but this isn't Margheriti's best or most stylish work. His best films, arguably, featured gothic elements from the horror films he made in that style to his gothic spaghetti western And God Said To Cain which is one of the most underrated films in that genre, he knew how to work mood and shadow into the film as a character unto itself. Obviously something like Yor, based more in fantasy and captivating the audience with might and magic doesn't feature much in the way of a gothic atmosphere. Margheriti does craft an entertaining little thrill ride that sets our hero against various creatures and enemies along with several different settings of time and space though the futuristic Star Wars ripoff territory doesn't come along until the last 20 minutes or so and it's not quite the epic send off you hoped for but it is equally as entertaining as the rest of the film.

Reb Brown is an actor that confuses me a bit, I'm not sure how he ever managed to get leading man status, even on smaller genre pictures. He's good looking, which is probably all it takes but he lacks any charisma that comes naturally to big stars. He's fine in the role of Yor but doesn't add anything to the character that isn't already there in the writing. I suppose all they needed was a decent looking blond haired lead and they got it. The acting never rises above average here but that's all I needed or cared to have in this schlocky picture. Corrine Clery and Luciano Pigozzi, who is probably the best actor in the cast, aren't given a ton to do as they romp through the forest and swamps but Clery is plenty attractive as the film's resident eye candy. The movie succeeds where it really needs to though. The sets look good from the forests to deep cave interiors filled with perils and booby traps, to the futuristic settings that looked like sets recycled from some of the post-nuke Mad Max ripoffs but I'm totally okay with that. The film looks good. And it's a lot of fun. Silly fun, but fun nonetheless. You can't take YOR seriously. The gaps in the story will bug you, the seams in it all will begin to show and before too long the entire movie will fall apart and that would be a shame because you'd be missing out on a goofy genre mash up that brings our distant past and future together and smashes them into one Reb Brown whirlwind of blond hair and muscles. And laser guns. And dinosaurs. And furry purple people.

The Audio & Video
Mill Creek has done very respectable work bringing YOR to Blu-ray for the first time. The 1.78:1 anamorphic widescreen transfer features good detail and a healthy and natural color palette. Black levels are deep and have no issues with compression or blocking. The picture has consistent speckling and imperfections throughout but it's never overly intrusive and there's only one or spots that have any sort excessive damage. The grain structure is solid and free of DNR. There are a few areas where the image gets softer but they're few and far between. The Blu-ray features an uncompressed PCM 2.0 stereo mix that sounds very good. The track is quite crisp and clear. The dialogue and score are complimentary and there's no distracting imperfections like pops, crackles or background noise.

The Extras
The special features are limited to a new audio commentary with Reb Brown and the original theatrical trailer. While it would be nice to have more on the disc, just getting a brand new commentary with the film's star is a very nice addition and more than we typically get on Mill Creek releases.

The Bottom Line
I'm really pleased with this release from Mill Creek. YOR isn't a film that needs a super special limited edition release that a company will charge $30+ for but it is deserving of a solid Blu-ray release and that's exactly what we have here. For under $10 you can grab YOR in HD and go on a wild adventure to our past and future all in 90 minutes. Mill Creek's done good on this one.

YOR: THE HUNTER FROM THE FUTURE is available HERE
Posted by Celluloid Terror (Seth Poulin) at 2:13 PM