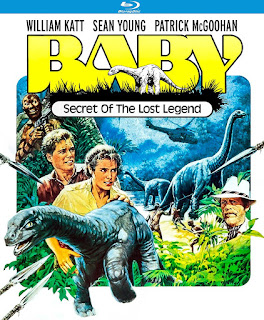 The Film
A pair of American scientists find themselves in the African jungle after discovering a series of dinosaur fossils. The natives give the pair clues and reassurance that the legend of the dinosaurs is real and before long they have found a living breathing pair of Brontosauruses and a young hatchling deep in the jungle. Unfortunately their discovery quickly turns into a fight to keep the dinosaurs alive as an evil and corrupt scientist has also found out about their discovery and is more interested in profits and his own devious intentions rather than the vast knowledge that could be gained from such a discovery.

Sean Young and William Katt star as the duo that discover the dinosaurs and are a likable pair with great chemistry. They're an easy couple to latch on to and cheer for to save the dinosaurs and their own relationship. Patrick McGoohan is perfectly despicable as their villainous counterpart who lusts after fame and fortune instead of learning from the prehistoric creatures that were long thought extinct. McGoohan has paired up with an African military group that provides the firepower and eventually kills one of the adult dinosaurs. Katt and Young turn to the local tribes who view the dinosaurs as almost god-like legends for help in rescuing the baby and the mother before they're transported away from their jungle home.

BABY was produced by Disney's Touchstone Pictures division which gave the film some breathing room to be more adventurous and violent. And while there are multiple shootouts and fight scenes with some minor explosions and this isn't technically a true Disney picture there are some very Disney flourishes that keep things child friendly. It's equal parts a fantasy and adventure and while I wouldn't suggest the toddlers watch it I think it's plenty safe enough for any child in elementary school. Released in 1985, the film features practical dinosaur effects that aren't too shabby for its time. You have to remember that this was several years before Stan Winston turned the special effects world on its head with his work on Jurassic Park. If you're expecting that level of work or try to compare it to the work done in the Spielberg classic you're going to be sorely disappointed. If you're able to accept the effects for when they were done I think they're fine and perfectly believable in spite of the fact that this film is showing its age more and more with each passing year.

BABY received negative reviews upon its release and hasn't been too lovingly accepted over the years but has developed a small cult following. It honestly surprises me that it's so harshly critiqued and there's a large disdain for it because I have always found it be an entertaining adventure film that may not be a classic or ever held in exceptionally high regard but is a fun little romp through the jungle with a few dinos in tow.

The Audio & Video
Kino Lorber has delivered BABY: SECRET OF THE LOST LEGEND to Blu-ray for its second release in high definition, previously having been released on Blu-ray by Mill Creek. This release features a serviceable HD transfer that seems to be from an older master. The 2.35:1 anamorphic widescreen transfer features a good color palette but for a film set in such a lush and colorful landscape it's disappointing that the visuals aren't more breathtaking. Skin tones are healthy with no waxiness and details is decent but never exceptionally strong. There are two audio options including a 5.1 surround and a 2.0 stereo mix. The 5.1 is nice for surround diehards but lacks anything to really make it essential. The 2.0 mix is crisp and clear and definitely a pleasing listening experience. There's no background noise or distortions.

The Extras
Extra features include a pair of interviews with director Bill Norton and star William Katt and is rounded out by the original theatrical trailer.

The Bottom Line
Despite being a bit dated, BABY still serves as an entertaining jungle adventure with a message of appreciating and preserving nature and life that all ages can enjoy.