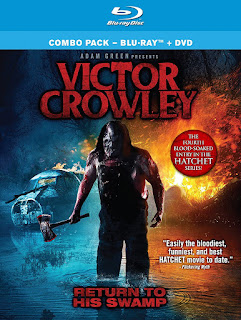 Adam Green's Hatchet series has relied on buckets of blood and a tone that successfully toes the line of comedy and serious slasher film. The laughs are not at the expense of the scare and fully add to an atmosphere and vibe that I would describe as a "party slasher". This is the type of horror movie designed to have a raucous crowd, hooting and hollering with each and every exceedingly gory kill sequence. The story is presented straight but light enough so that it isn't down beat and designed more to thrill the viewer than to chill them. The first three installments in the franchise have been largely successful at this with groups of characters that are developed enough, or just plain likable enough that we connect with them and care about them. From Deon Richmond's longing for a Moons Over My Hammy from Denny's in the first film to Colton Dunn's biscuit song in part 2, we're given reasons to enjoy the time we spend with these people that are merely scraps for the meat grinder in true slasher film fashion. I won't pretend the films are perfect but I have an absolute blast with them and proudly sing their praises so when I heard the surprise news that a forth installment was not only announced but actually already finished and screening I couldn't wait to get my hands on another gore soaked adventure into Honey Island Swamp.

Titled after the monstrous, deformed, undead murderer of the swamp, VICTOR CROWLEY wastes no time bringing the comedy in to the film with a bit of a prequel gross out gag that quickly turns in to the gore fest we're used to and then it keeps going. Following in the footsteps of its predecessors VICTOR CROWLEY is a gore hound's wet dream. Arterial blood sprays are common place and limbs fly around like beads at Mardi Gras. People are scalped, stomped, mutilated with a hammer (claw end of course) and just plain fucked up. The special effects aren't going to pass for real life but they're well done and incredibly fun and fully believable. This is the meat and potatoes of the Hatchet series and writer/director Adam Green knows how to deliver it in droves. His monstrous creation and titular character Victor Crowley looks menacing with his design here. He's hulking and massive, his deformed and mutilated face are horrifying. Kane Hodder returns to wear the suit and provide the kills in a way it seems only he can. I do have to say that the quality of the makeup and suit look to be on the cheap side. The design is good but the execution is lacking in the scenes where we get a long clear look at Crowley, of which there are plenty.

On a similar note, the sets and production also feel lacking and look and feel way too much like a soundstage and too little like an actual swamp. The film is comprised almost entirely of medium shots using which exposes how little to each little set location there really is. I like the look and design of the swamp, especially the areas in which the tours have set up their attractions in but we never get a good look at any area that looks to be more than ten or twelve yards across. The size of those set pieces are a small complaint compared to how much time is spent in the fuselage of a crashed airplane. I'd estimate that 2/3 of the movie is spent inside this plane as Crowley picks off someone one by one as they try to make their escape or he goes after inside the plane. The pacing is really off at these moments when we're left with a group of survivors doing basically nothing and all we can do is hope someone dies soon so the movie progresses. Eventually it does and a lot of bodies drop in a small amount of time which again feels oddly paced.

The group of characters in VICTOR CROWLEY are a very uneven group as far as likability goes. As far as I'm concerned Parry Shen is a total star in these movies. He's been in each film as different characters and returns in his role of Andrew from part 3, now shilling a book of his tale of survival from the events a decade earlier. Shen is naturally funny without having to try too hard and forcing it, he's also able to bring a well rounded performance that is both strong and vulnerable. He excels in all situations and is easily the best part of the series front to back. Laura Ortiz makes her debut in the franchise as Rose, a character that started out being a bit grating for me but by the end I was totally on her side and rooting for her. Ortiz will be a familiar face to Adam Green followers as she starred in his sitcom series Holliston and also appeared in his segment for the anthology horror film Chillerama. She brings a cute ditsy and sometimes clueless type humor to the picture that ends up working more as the film moves along. There's plenty of other characters and familiar faces that stand out like Felissa Rose (Sleepaway Camp) as Parry Shen's agent. Her forced accent is unbearable and I found myself disappointed in how much I loathed her. I was more disappointed in how quickly Tezz Yancey comes and goes. He's fantastic in his very limited screen time and I would have loved to see how his character reacted to Victor Crowley.

I found VICTOR CROWLEY to be a mixed bag with the gory kills appealing to the lowest common denominator part of my brain and having major gripes with some of the writing such as a major part toward the end of the film that makes no logical sense and has no place in the timeline of the movie that only serves as a convenient way to set up the climax. This also happens earlier in the film when *SPOILER the plane crashes for no reason. One second it's flying fine, the next there's a brief mention of slight turbulence and then it's plunging toward the swamp. *END SPOILER There are some stylish choices here and some unfortunate cutaways. There's one scene where we watch Crowley stalk a victim through the windows of the downed plane, slowly going in and out of view as he passes each window and metal body section of the plane. I felt that was a golden opportunity for an original kill sequence and stylish scene but it was more of a wasted opportunity than a victory in creativity. VICTOR CROWLEY also introduces ideas that long time fans of the fans will question (random spell resurrection?) and it works more as a set up to a possible part 5 than it does on its own, something I don't think any of the previous films suffered from, but it is still a ride light in tone and covered in blood.

For my money VICTOR CROWLEY is the most heavily flawed film in the Hatchet series but there's enough gore and cheap thrills to entertain fans of the series.