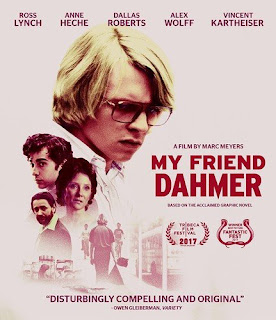 The Film
Everyone knows who Jeffrey Dahmer is and chances are you've seen some sort of true crime or documentary film about his crimes. What most of those pieces don't cover are his time in high school, the time directly leading up to the start of his years of murder. MY FRIEND DAHMER takes us face to face with Dahmer and his closest family members and friends during that crucial time that could have been make or break for a serial killer.

As the film opens Ross Lynch stars as Jeffrey Dahmer is spending most of his free time in a shed his father built for him to perform biological experiments in, mainly jarring the corpses of roadkill he has picked up in acid and watching them decompose. When Jeffrey's father begins to worry that he's getting too obsessed with his shed he tears it down and forces his son to find more socially normal activities. Jeffrey finds a group of friends who invite him in to their group after seeing him act out in a wild, mentally challenged manner for attention. The group drives around with Dahmer filming him doing his act in different areas around town such as the market and the mall while Dahmer disrupts everything around him flailing around, knocking things over and making spastic sounds. As the group gets closer to Dahmer as friends they begin to see the inner workings of his life and how bumpy and broken his family life is. As his family life crumbles Dahmer begins drinking and continuing his obsession with road kill and finding out what the inside of animals and humans look like.

MY FRIEND DAHMER was written and directed by Marc Meyers and is a sharp production. Meyers gets really great performances out the entire cast most notably from Ross Lynch and Anne Heche who plays Jeffrey's mother. Lynch really deserves any and all accolades he received as his performance was subtle and over the top in all the right ways at all the right times. Heche perfectly portrays a woman with her own mental issues in a failing marriage and with her own skewed view on her little world. She's a talented actress and has proved it for years, once again doing so here.

The film's title is a little bit funny in an ironic sort of way because the entire film feels like its sole purpose is to get you to sympathize with Jeffrey Dahmer and to, at least in part, justify his future actions. Sure he had a rough family life but plenty had rougher. And he grew up without friends for a long time but there are plenty of introverts and outcast children who had a hard time making friends. Skinning and gutting animals to watch them decompose in jars of acid isn't normal. Harming live animals isn't normal. And we shouldn't try to normalize it or sympathize with it. Sure there's plenty to be said about how his family should have noticed more and sought help for him but that is but a piece in a much larger puzzle.

I don't want to turn this review into a discussion on serial killer mentality and psyche, so I will wrap it  up commenting on the film as whole. Sadly the performances are mostly wasted on a misguided tone and a timeline that jumps haphazardly from scene to scene without any sort of organic flow. In one scene Dahmer is sneaking his dad's alcohol for the first time and in the next he shows up to school totally drunk but nothing is made of it and quickly the drinking plot point is dropped. This is how the entire film progresses with plot devices coming and going and time jumping ahead at random intervals that never really make sense. I feel that MY FRIEND DAHMER wastes a chance to be a really interesting look into the making of a serial killer as the film looks great and looks great but sometimes it's not about what you say but how you say it.

The Audio & Video
MY FRIEND DAHMER gets its home video release from MVD Visual and this Blu-ray looks fantastic. The 2.40:1 aspect ratio has a gorgeous look with striking clarity and strong colors that bring the 1970s period setting to life with excellent detail levels in both textures and surfaces. Skin tones are fleshy and natural while black levels are deep and inky. The audio is presented in English Dolby Digital 5.1 and 2.0 mixes and whichever option you pick will be pleasing to the ear. The audio is crisp, and perfectly mixed. There's no hiss, crackling or other distortions.

The Extras
Special features include an interview with star Ross Lynch, a behind the scenes slide show and the theatrical trailer.

The Bottom Line
MY FRIEND DAHMER is a slick looking film with good performances throughout but it is nothing more than a mishmash of scattered scenes that feel designed to make us sympathize with Jeffrey Dahmer. Rent it if you're curious.

MY FRIEND DAHMER is available HERE
Posted by Celluloid Terror (Seth Poulin) at 12:23 AM