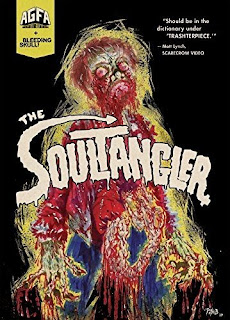 The Film
Dr. Lupesky has developed a drug that allows him to enter a corpse and possess its very soul turning it in to a reanimated murderous monster. A reporter for a small local newspaper takes on the strange case of Dr. Lupesky and vows to unravel the mysteries surrounding him and reveal his diabolical intentions.

THE SOULTANGLER was apparently shot on 16mm film but everything about it from its aesthetic to the off-the-wall plot and  wild special effects make it a perfect fit with the shot-on-video classics of the period like Killing Spree and Video Violence. There's much more care put into the special effects and makeup effects than anything else and it pays off because there's a lot of really great monster designs and effects. It may be a bit low rent and amateurish but it is also inventive and filled with passion and I love it. The plot plays out like an acid trip that sort of takes forever to get anywhere but instead of being bored in a doctor's waiting room you're enjoying the incredibly off beat and unnatural interactions everyone around you is having. All the while doctor is performing bizarre experiences and trying to enter a dead body through its eyes. Does that make sense? No? Good, you're following along just fine. 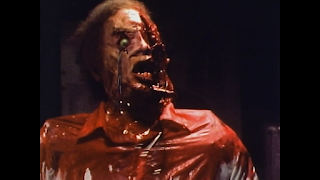 Clocking in at a full hour and a half the film is entirely too long for its own good but I didn't mind because there was always something strange going on like the several minutes spent talking about Dr. Lupesky avoiding trouble, leaving the country to study more freely in Luxembourg but returning to the USA after discovering their laboratories weren't up to his standards. This is just one example of things that could have and should have been cut from the script but they weren't. They're firmly planted in the script and my prediction that it wouldn't come back to make a damn bit of difference was true and it gave me a good chuckle. THE SOULTANGLER has plenty of moments that don't really matter but are definitely entertaining but it also has a lot of energy and while it borrows quite a bit from Re-Animator and H.P. Lovecraft  there's no way this movie gets made without ingenuity, passion and fun. And it is that fun that permeates each and every frame of the movie and transcends the screen and tangles your soul with that fun. 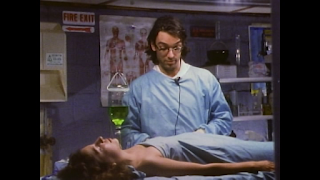 The Audio & Video
Released on DVD by the AGFA/Bleeding Skull and MVD Visual, SOULTANGLER has been transferred from its original 1" master tapes after apparently being shot on 16mm. Nothing about this looks like 16mm to me which probably has to do that it was edited on and transferred from 1" tape. That's perfectly fine with me I think this movie benefits from that very distinticve shot on video look and definitely fits in to that category as a movie. The image quality of the 1.33:1 full frame aspect ratio is actually pretty decent and clear. Detail is marginal but the special effects look good and that's what mainly matters. There is the occasional video tracking line from the 1" tape but nothing distracting. The audio quality is listenable but gets thin and tinny when voice over work is done. There's no real distracting background noise or other distortions so overall I'm pleased with the A/V quality. 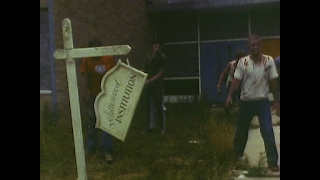 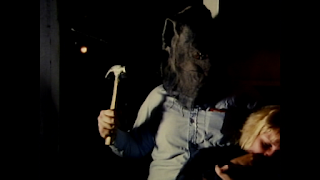 The Bottom Line
I had built up quite a movie and big expectations in my head based solely on the movie's title and plot and I'm thrilled to say that THE SOULTANGLER did not disappoint at all. This isn't for everyone but for the weirdos that love shot-on-video schlock there's no reason you shouldn't be all over this DVD!

THE SOULTANGLER is available HERE
Posted by Celluloid Terror (Seth Poulin) at 10:52 PM