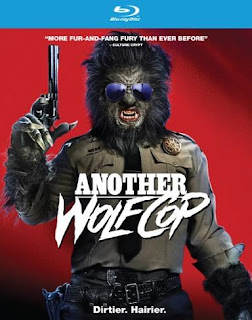 
The Film
A year after the events of the first film the town of Woodhaven is home to a new brewery being opened by a devious entrepreneur named Swallows (Yannick Bisson) who plans to use his new Chicken Milk Stout to attack the local population with stomach bursting monsters. It is up to the local police force led by the wolfcop himself Lou Garou to stop Swallows and save Woodhaven.

A few years have gone by since the release of Wolfcop but it is still fresh in the mind's of horror fans including myself and I was cautiously excited about the sequel being released. My trepidation comes from plenty of prior experiences where a successful modern indie horror movie spawns a far less successful sequel, losing the magic that the first film had created. ANOTHER WOLFCOP clocks in at only 79 minutes and upon seeing that runtime I was a bit less worried as it seemed that writer/director Lowell Dean had a tight idea for a sequel that can hit all the beats and get us in and out in a whirlwind of lycanthrope action but what I was presented was a mess of a story that only sort of comes together and more ideas that are used for laughs than to actually progress the story. The stomach monster angle only gives the character of Willie Higgins (Johnathan Cherry) a minor inconvenience to deal with and otherwise doesn't have any real point.

The special effects are a high point for the film with the wolf suit looking excellent yet again including some simple yet effective transformation scenes. There's plenty of gore including limbs getting lopped off and guts getting ripped out all of which are dripped with blood and will please the gore hounds. The effects work on the stomach monsters isn't bad either except for the one on Willie Higgins which looks like a cheap piece of rubber with a shitty face painted on it. I can see that monster design being a style choice based on how good all of the other effects were but it doesn't work either way. It's played for laughs but it's painfully unfunny which is a running theme as this is very much a horror comedy but the laughs are sporadic.

I am being rough on the movie because even though I approached the film with tempered expectations I still felt disappointed and cheated. Wolfcop had a great idea and was well thought out and executed with skill. Perhaps most importantly it felt fresh and didn't force itself to be everything else, it was happy being Wolfcop for better and for worse. ANOTHER WOLFCOP tries so hard to be everything all at once. It is bloated with references and nods to make it feel relevant to current genre trends. It has a bunch of ideas but none of them are thought through to conclusion and there's a lot of clutter in its 79 minutes. There are moments I enjoyed and I thought the use of the moon rock was ingenious but ANOTHER WOLFCOP feels more like any film that would have come out a decade ago towards the start of this "grindhouse revival" we find ourselves in than a sequel to one of the great horror comedies of the last few years.

The Audio & Video
ANOTHER WOLFCOP comes to Blu-ray courtesy of RLJE Films who previously released the first film and it looks and sounds excellent. The 1.78:1 anamorphic widescreen transfer features a crystal clear picture with a vibrant color palette, especially with the bloody reds. Detail is strong letting the special effects work shine and giving way to great looking surfaces and textures. There's no signs of edge enhancement or excessive DNR use. The audio is presented in a 5.1 DTS HD Master Audio mix that is crisp and mixed perfectly between the dialogue and rocking soundtrack. There's no distortions or other audio hiccups to mention.

The Extras
-"The Making Of Another Wolfcop"
-"Friends & Foes: Meet The Cast"
-"The Monster Shop" - Special FX featurette
-"Shoot Or Die: Surviving On The Set"

The Bottom Line
While there's a good bit of gore and some scattered laughs, ANOTHER WOLFCOP simply felt slapped together and a weak story with very little actual Wolfcop makes for a rather disappointing follow up.

ANOTHER WOLFCOP is available HERE
Posted by Celluloid Terror (Seth Poulin) at 1:00 AM