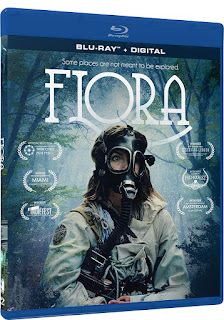 The Film
Set in 1929, a team on an expedition to an uncharted forest to map the terrain and document the local plant life finds the team that arrived before them have gone missing. They realize that the native flora contain a deadly bacteria and that their lives depend on escaping the mysterious forest with limited supplies as they're being attacked by nature itself.

FLORA is an ambitious debut project for writer/director Sasha Louis Vukovic who was pretty freshly out of film school when this production went underway. Not only did he take on a period piece but he focused the film on an invisible antagonist which makes the audience focus entirely on the story and doesn't give himself any wall to hide behind as he could have with a more special effects driven horror movie. And to his credit I think Vukovic is largely successful. FLORA is a tense thriller, with fleshed out characters who have genuine intentions and purpose within the film. There are a few moments where the direction gets a bit too into itself and goes for flare over simple effectiveness. I chalk this up to a new director trying to show what he's capable of and I understand that but it's not always necessary. Sasha Vukovic is a young director and I think he'll be able to dial in his style and feel out when to reel it in a bit in the future.

The cast is comprised of a group with limited experience and like their director, there's more to praise than to critique. Instances of stilted performances are spread amongst a believable ensemble who are more than up to the task of not only a dramatic but at times a physical performance as well with plenty of sprinting and carrying heavy equipment through the actual Canadian forest this movie was shot in. A period piece is only as believable as the set dressing and wardrobe and that is tough to accomplish with millions of dollars let alone with the $120,000 (Canadian) budget that the film had according to IMDB and I never once questioned that this film was taking place in the late 1920s. I applaud the Vukovic's writing and costuming of Olivia Ball to make sure the characters spoke and wore the era.

FLORA isn't perfect but it is quite good. Sometimes less is more and in separate instances FLORA both adheres to that rule and breaks it. The script has questionable character decisions and potential plot bumps if not holes regarding this unseen organism but I found myself engaged, entertained and totally invested by this adventure in minimalist horror that reminded me of M. Night Shyamalan's The Happening if The Happening if Shyamalan had written a script that was worth a damn. FLORA is a debut that avoids many of the stumbling blocks a young rookie director and writer fall victim of and is a promising start. I hope Sasha Vukovic works more in the horror and thriller genres in the coming years.

The Audio & Video
Mill Creek gives FLORA a home on Blu-ray and it looks very nice. The digital photography shines in the 2.00:1 anamorphic widescreen transfer with the lush greens of the forest popping and engulfing the screen. Skin tones look fleshy and natural with no signs of waxiness or pink coloring. There are no noticeable issues with black levels clumping up or becoming pixelated. The 5.1 DTS-HD audio mix sounds fantastic with the beautiful score shining through when it needs to be more in the foreground but blending nicely with the dialogue the rest of the time. The audio is crisp and clear with no distortion issues.

The Extras
Bonus features include a short behind the scenes featurette which provide a bit of insight into the development of the film and its production. Also included are deleted scenes and an audio commentary track with writer/director Sasha Louis Vukovic and stars Teresa Marie Doran and Dan Lin.

The Bottom Line
FLORA had success on the festival circuit and deservedly so. It now has a very respectable home on Blu-ray and I think it deserves a place on every horror fan's watch list.

FLORA is available HERE
Posted by Celluloid Terror (Seth Poulin) at 12:07 AM