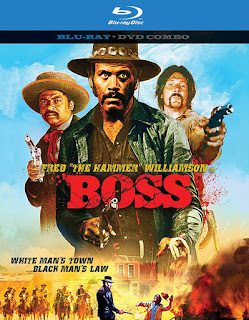 The Film
Two bounty hunters named Boss (Fred Williamson) and Amos (D'Urville Martin) save a woman named Clara Mae while she's being attacked by bandits and find a letter naming him sheriff of a nearby town. The mayor of the town has little control and answers to a gang leader named Jed Clayton (William Smith) out of fear. Despite Boss and Amos wanting to clean up the town and get their reward for bringing Jed Clayton to justice the mayor and most of the townspeople want no part of two black men running the law. BOSS NIGGER is a story of race and revenge. 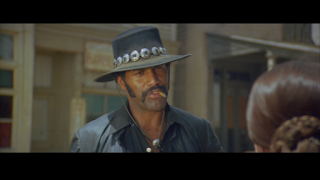 This was the third film in a series of black westerns starring Fred Williamson. It was preceded by The Legend Of Nigger Charley and The Soul Of Nigger Charley but follows its own story as opposed to being a sequel to those films. BOSS NIGGER is the most polished film of the bunch and Fred Williamson is definitely more comfortable in front of the camera than he was in the earlier films having really honed in his performance and personality. Veteran director Jack Arnold makes a slick and at times stylish production, using the dusty wooden exteriors and dark, gaudy interiors to his advantage. Arnold is best known for directing some of the best science fiction and horror films of the 1950s including the timeless The Creature From The Black Lagoon but was no stranger to the western genre having directed episodes across various western TV series and a few feature films as well. The style and tone on display in BOSS NIGGER is much different from anything that Arnold made in the 50s as the western reinvented itself after the spaghetti western craze and became a much dirtier and more violent affair. Add in that this was a blaxploitation film featuring two black stars battling a white town who doesn't appreciate their services coming from a script written by one of the stars and Jack Arnold could very easily have been lost with how to handle it. 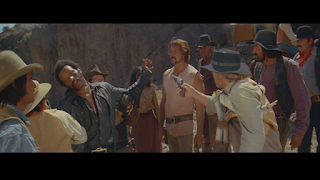 Thankfully he was not. He handled Fred Williamson's script well and that script was a solid one. While playing to most of the tropes of spaghetti westerns Williamson was able to craft a script that deals with racial tensions and race relations of the 1970s but didn't make the film feel forced around it even if it is the main theme of the film. After all the film's tagline so brazenly and proudly exclaims "White man's town, black man's law!". And the black men make it their law, even adding in dashes of humor at times particularly with D'Urville Martin who excelled at making me chuckle as he happily arrests the more uppity white folks in town for anything from saying the N-word to him or simply not returning a good morning gesture. All that Boss and Amos were asking for was some respect but it never came. Things only get worse until Jed Clayton really steps in to the picture. William Smith was no stranger to playing a white antagonist in blaxploitation films and turns in another good role here, especially his final showdown with Boss which is not only emotional but also powerful in its message and stylish in its execution by Jack Arnold. "That was for Poncho, that was for Clara Mae, and this is for me!". Just thinking of it gets me riled up. 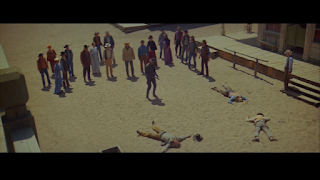 That final showdown would not be where the credits rolled and the film ends somewhat ambiguously but with a clear message. BOSS NIGGER does have a political and social voice as many blaxploitation films did but it's also simply a well made western with some good performances and characters and moments that will stick with you. And to top if off it is has a great theme song.

What more could you ask for?

The Audio & Video
Kit Parker Films releases BOSS NIGGER through MVD in the film's first HD presentation on home video. The Blu-ray features a 2.35:1 anamorphic widescreen transfer that isn't perfect but looks good overall. Colors are strong and lifelike but color timing fluctuates a bit between the warm natural look to that with a very light green hue. It's very minor but it is there. The image is generally sharp enough but softness intermittently pops up. The transfer has just a bit of speckling on an otherwise clean image. Black levels leave a bit to be desired but detail is rather good throughout.

The Audio comes across in a crisp and well mixed LPCM 2.0 track that sounds great. I didn't notice any distortions or damage to the track and the dialogue and funky western inspired soundtrack compliment each other nicely. 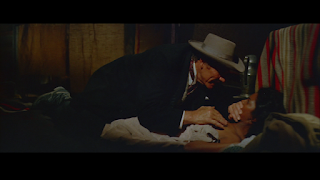 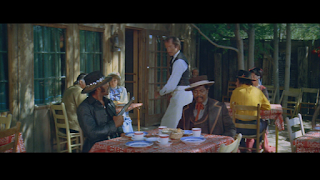 The Bottom Line
Blaxploitation films and revisionist westerns are still under represented on Blu-ray so it is great to get a solid HD presentation of BOSS NIGGER. Expand your horizons a bit and give this one a look because it's a very good blaxploitation western mashup.

BOSS NIGGER is available HERE
Posted by Celluloid Terror (Seth Poulin) at 12:13 AM