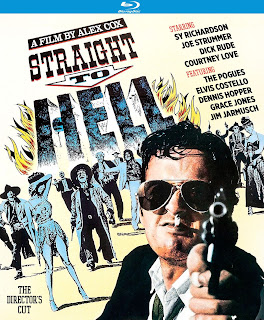 The Film
What do you get when you combine the comedic anarchy of Mel Brooks with a "don't give a fuck what you think" punk rock attitude and roll it up in to a spaghetti western spoof that someone like Quentin Tarantino would worship? You get something along the lines of Alex Cox's STRAIGHT TO HELL.

Four bumbling criminals blow their job by being hungover and letting their target check out of his hotel before they could get to him so to make it up to their boss they rob a bank and barely escape. Their car breaks down in the Mexican desert so they bury the cash and hideout in what they thought was a deserted town. It's not ghosts they have to worry about here but maybe the undead would be better than dealing with a lot of kill-happy, cowboys that have been exposed to too much sun and are all hopped up on coffee.

Alex Cox is a well known cult filmmaker having made films such as Repo Man and Sid And Nancy which have amassed huge followings and have even found themselves among the ranks of the Criterion Collection. He's also a huge fan of the spaghetti western genre, he's provided commentary tracks to various films and even written a book on the subject. He has proven himself a very versatile filmmaker that can make great films in many styles and tones so it is no surprise that he wanted to make a spoof of the spaghetti western genre in a more contemporary setting. It's also made up of quite a cast of characters, largely filled with various musicians such as Joe Strummer of The Clash, Elvis Costello, The Pogues and Courtney Love as the female lead. This cast of non-actors add a bit to the chaos of the movie as you can only wrangle their performances so much. Even the more trained and traditional actors give wild performances but with a bit more polish to them.

STRAIGHT TO HELL is hilarious with the comedy coming from all angles and starting from the very beginning and never letting up. The cast that Cox uses definitely plays a big role in the vibe and attitude of the film. The overall story is a pretty typical western with the hunt for a hidden fortune, double crossing, a tough female love interest but it's all contorted into a zany and wacky affair. It also features some splattery violence that catches you off guard at first but quickly blends in to the madness. Story takes a bit of a backseat at times with a few stretches of film that went so far into left field that it lost me for a bit and that was okay because I was having enough fun that just spending time in this wackjob of a town was enough for me.

It may not be the most accessible film ever produced as it really does scream "cult" in every aspect of its production and not everyone is cut out to watch these types of movies. Whether it is the punk rock cast, the over the top violence, a pregnant and shrieking Courtney Love or just how bizarre the entire affair is, it definitely has a limited audience. One person that definitely enjoyed it was Quentin Tarantino as it is immediately evident how it influenced him on his early work, especially Pulp Fiction. Maybe STRAIGHT TO HELL is a bit too self indulgent and maybe Alex Cox gave too few fucks to make a traditionally good film and the bad reviews it received upon its release reflect that but for as much as I think Alex Cox was seriously loving every second of making this film I appreciate how bonkers it is and I had a lot of fun watching it.

The Audio & Video
STRAIGHT TO HELL arrives on Blu-ray with a new 2K restoration from Kino's Studio Classics line with great success. The anamorphic widescreen 2.35:1 transfer has great picture quality and is sharp and clear, with no dirt, scratches or other debris. The desert setting is hot and sweaty and the fine details of the dirt, sand and broken down town textures are on point. Colors are vibrant with deep black levels and no signs of pixelation or blocking issues. the audio comes across in a DTS-HD Master Audio mix that sounds crystal clear. There's plenty of shoot outs and explosions to give your sound system some content to show off with while dialogue and music compliment each other nicely.

The Bottom Line
STRAIGHT TO HELL isn't the smoothest ride in town but that's what makes it memorable and gives it a distinct personality. This movie is wild and I dig it. Recommended!