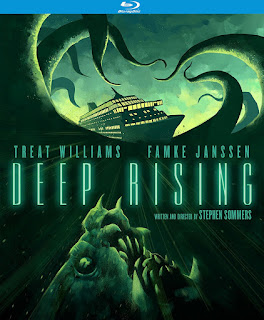 The Film
A group of hijackers target the most luxurious cruise ship ever built on its maiden voyage but find that all of the passengers have vanished. They're not alone however and they quickly find a terrifying creature from the ocean depths is on board and is more deadly than anything they could have imagined.

DEEP RISING was another movie in a line of mid to late 90s creature feature revivals that featured everything from killer snakes and insects to mythic gods and sharks. The setting could be anywhere from land to sea and even sky but the monster movie returned during that time thanks in part to CGI becoming an increasingly common special effects tactic that saved time and money over practical effects. There were pros and cons to using computer effects that still stand to this day but the return of these types of monster movies that are reminiscent of the monster movies that were staples of drive-ins during the 1950s was welcomed as far as I'm concerned. Stephen Sommers has been responsible for some huge productions that were massive box office smashes like the Brendan Fraser Mummy movies and the more recent under the radar cult hit Odd Thomas that starred the late Anton Yelchin. DEEP RISING had a decent box office return despite being largely panned by critics as a cheap Alien knockoff. And it might be an Alien knockoff but it had effects that were top notch for its time and was quite a sharp looking film. More importantly it was a lot of fun.

Sure, if you want to dig in to DEEP RISING on an analytical level you can pick it apart. You can note that Treat Williams is far more of a supporting player than a dashing, charismatic leading man. You can look at the group of hijackers and play "Bad Guy Bingo" with their stereotypes and you can pick apart the lapse in logic in how the giant sea creature manages to be everywhere on the boat at any given time. You can do all that but then you'd be showing yourself to be the uptight party pooper that you really are. DEEP RISING asks you to do one thing; enjoy. Enjoy the shootouts that tear entire rooms on the cruise ship to shreds at the slightest hint of a sound. Enjoy Famke Janssen looking smoking hot. Enjoy that this movie puts the pedal to the metal and never lets up or slows down. Enjoy the tentacle monster and enjoy how it turns its victims into a gloppy mess of blood and guts.

There was one question I had before watching DEEP RISING for this review - Would it hold up? It has been two full decades since its release and I wondered if it would hold up to modern eyes and scrutiny. Despite effects that are aging poorly and some questionable casting choices I found DEEP RISING to be a proper example of the 90s creature feature revival for better and for worse. Thankfully DEEP RISING knows what it is and succeeds at staying true to its identity. It's loud and proud and quite a bit of monster madness fun.

The Audio & Video
Kino Lorber has released DEEP RISING under its Studio Classics banner with a new 4K scan and restoration that blows any previous home video release of the film out of the water. Colors are strong and dark levels are deep. Detail is good, but finer details could be a bit more realized. The gore remains a strong visual point for the film which should delight viewers as it is properly gooey and gross. Skin tones look healthy as well. The DTS-HD Master Audio 5.1 mix sounds properly powerful  with all sorts of screaming, gun blasts and various other knocks, crashes and booms to give your system a workout. The dialogue comes through crisp and clear despite the boisterous sound effects showing off how well the mix job on this Blu-ray is.

The Bottom Line
Nineties creature features have been unfairly maligned over the years because of their dated effects work but some of them hold up as entertaining and exciting horror thrillers and DEEP RISING is certainly one of them and Kino has given us what I consider to be a definitive edition to celebrate the film's 20th anniversary.

DEEP RISING is available HERE
Posted by Celluloid Terror (Seth Poulin) at 7:31 AM