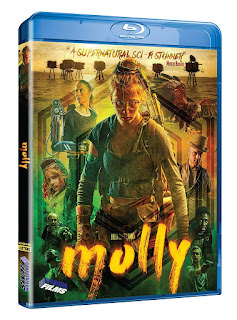 The Film
When a maniacal gang leader catches wind that a girl with supernatural powers is roaming the barren wastelands near his camp he sets his henchman on a mission to capture her to be the new showpiece in circus where he forces competitors to fight to the death.

MOLLY stars Julia Batelaan as the titular character who travels a post-apocalyptic landscape by herself, staying alive and avoiding trouble when possible but when word gets out that you have supernatural abilities there's always going to be someone that wants to harness your powers for their own gain. Molly finds herself in constant trouble as she is chased for the duration of the film's 91 minute runtime by Deacon's (Joost Bolt).

Only when Molly discovers a young girl living alone among the dangerous landscape does the story take any sort of turn and it's more of a slight merge than a turn as it only adds a person for Molly to care for than actually changing the story. MOLLY'S weak story is its biggest downfall. There's just not enough story to make this movie a complete success but it still manages to be a successfully entertaining film. The directors were obviously influenced by films like Mad Max and maybe even some of the more low budget and exploitative rip-offs and they wanted to put their own spin on this style of film and where story isn't their strong suit the action scenes, of which there are plenty, and turning an obviously tight budget into a visually appealing production with set designs and characters that made the absolute most of the money spent on it.

MOLLY is also a well made movie with good fight choreography, good looking photography and a bit of stylish direction for good measure. I think it would have had a better flow at 75 minutes given the basic story and that some of the lesser fight scenes get a bit repetitive and at that point I'd be a bit more forgiving on the story but no matter how I slice it MOLLY was what I hoped it would be - a high energy post-apocalyptic romp that will hopefully help reignite the fire for these types of films.

The Audio & Video
Artsploitation Films gives MOLLY a properly beautiful presentation featuring a 1.78:1 anamorphic widescreen transfer that has a strong color palette and vibrant photography. Skin tones are natural and detail is good. The audio is presented in an English 5.1 surround sound mix that is free of any distortions. The mix blends music and dialogue with a proper balance so that neither gets overpowered or lost.

The Extras
Special features include a commentary track with directors Colinda Bongers and Thijs Meuwese along with a 30 minute making-of featurette.

The Bottom Line
MOLLY is far from perfect but I'm a nut for post-apocalyptic movies and MOLLY was so genuine and earnest in its delivery that I couldn't help but have a smile on my face for the duration.