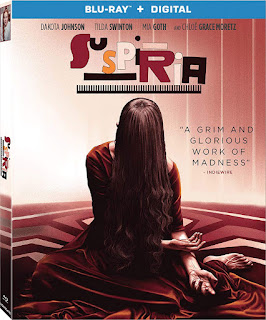 The Film
Upon leaving the theater after seeing SUSPIRIA on Halloween night my mind was racing with everything I was still trying to take in. Luca Guadagnino had not only completed a project that had been rumored about for a decade but he gave me something I was both challenged by and that I appreciated. He had remade Dario Argento's Suspiria, my favorite film. Now, there was never and instance that I thought this modern take eclipsed the original but I did think that Luca Guadagnino gave the audiences a fresh take on it. But even after I slept on it and eventually decided to put SUSPIRIA quite high on my favorite films of the year list I knew that I had to watch it again to take it all in and process it.

Now given the chance to see it again I'm left with some of the same questions I was before along with some new ones. Opinions were solidified or flipped on their head. A second viewing of Guadagnino's SUSPIRIA was memorable, as I'm sure each viewing of this film will be but not all of it will be positive memories. For one, and I do think this is my single biggest problem with this film, is that the music is simply nonexistent. SUSPIRIA is a tale about a dance academy that secretly houses a coven of witches, it was a ballet school in the original but it's a much more modern and interpretive form of dance being used in the remake but either way you would imagine the music would play a huge role in giving the dancers something to dance to and of course setting a mood. Goblin's bombastic score certainly did both, giving us a catchy little melody that was easy to latch on to as the dancers performed their routines and the rest of the film attacking our ears and minds with bellowing wails, sighs, and beautiful sounds that could be described as otherworldly. The original Suspiria's soundtrack is an experience in itself. Thom Yorke of Radiohead was tasked with the job of creating the remake's soundtrack and the music he delivered would be better suited for an Elliott Smith biopic than a horror film. On top of the music simply not fitting the film at all it's also totally lost in the film's audio mix, while often times the instructors opt to have their dancers perform to no music. Pretty brilliant, eh? It's not even that I'm comparing Yorke's score to Goblin's, it's that I'm comparing Yorke's score to any horror film score. His score has nothing to offer this film.

But Tilda Swinton, Dakota Johnson and the rest of the ensemble cast had a lot to offer the film. Dakota Johnson is fresh off the Fifty Shades Of Grey trilogy and proves she has real talent here as the lead Susie Bannion. She's the main focus of the film and gives a measured performance that fits in to the mood of this film perfectly. Tilda Swinton proves why she's Hollywood royalty playing a trio of characters. Her main character, Madame Blanc runs the school most of the time and has her hands directly tied in with Susie. I loved watching Tilda and Dakota perform together. The remaining cast including Mia Goth and Chloe Grace Moretz all turn in physically demanding and moving performances. There's no denying the power and ability this cast possesses and provides the film which leads back to the director and Luca Guadagnino creates some striking visual sequences including the brutal mangling of a body, the intense dance sequences that are much more aggressive and at times sexual than anything we saw in Argento's original.

SUSPIRIA just had a bit of disconnect with me on this second viewing that I think I overlooked on my initial viewing because I was trying to take everything in at once and in a film such as this you're not going to take it all in on a single viewing, at least not properly. When I went back to revisit the film I felt that the cold, hard look covered in mainly concrete greys and dull interiors, a stark contrast to Argento's original that is infamously drenched in color and texture, that visual style transferred over to the mood of the film and ultimately my connection to it. This was due largely in part that I feel there were subplots that dragged the film out needlessly to a run time nearly two and a half hours long and didn't bring the emotion to the film that they intended to.

After a second viewing I'm still a fan of SUSPIRIA. I don't think it rivals the original but I think it is a true piece of art with a lot of talent involved. It's a vicious horror film at times and no review of it would be complete without totally gushing over the black mass climax where Mater Suspiriorum reveals herself and uses a demon to dispatch of any body that didn't pledge their allegiance to her. The lengthy sequence is flooded in red lighting, drenched in blood as bodies literally explode into a shower of crimson mist while dancers violently gyrate around the mayhem and Helena Markos exposes herself as a disgusting mess of sweat, slime, scars and a totally inhuman monster form. I have no problem calling this scene the best black mass or witchcraft scene in any film of the 21st century. Hands down. I'd even say the film is worth checking out for that scene alone.

The Audio & Video
Lionsgate brings SUSPIRIA to Blu-ray with a spectacular A/V presentation. The 16x9 anamorphic widescreen picture quality is stunning with super deep black levels that have no issues with blocking or compression. The detail levels are very high giving life to the textures around the dance academy and the harsh concrete structures around the city. Colors are reproduced beautifully despite the film having a rather cold and dull color palette until its climax. Otherwise the picture quality is pristine and I have nothing negative to say about it. The audio is handled in a Dolby Atmos track and it sounds stunning. I don't know what else to say. Five stars all around.

The Extras
There are three different short featurettes that total less than fifteen minutes. "The Making Of Suspiria" gives a brief general overview and comparison to the original, "The Secret Language Of Dance" explores the dancing and choreography within the film and "The Transformations Of Suspiria" is perhaps the most entertaining of the three as it gives us a look into the prosthetic effects and makeup in the film.

The Bottom Line
SUSPIRIA is a film that will challenge and divide audiences and while it never had a chance to challenge the original it certainly stands on its own two feet as a beautifully crafted tale of witchcraft and I recommend it without hesitation.