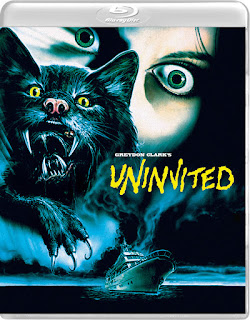 The Film
Have you ever sat there watching a movie, any type of movie, and thought to yourself "This would be so much better if a radioactive cat puked up another cat and the hairball cat attacked people viciously."? Well if you have then you're in luck! And if you haven't, why not? 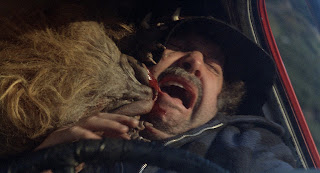 Greydon Clark (Without Warning,  Satan's Cheerleaders) helms this video store era cheesefest about a crew of sleazy businessmen who invite a few sexy co-eds on to their yacht to cover their tracks only to find that the girls have found a runaway cat that they won't let go. This cat also happens to be radioactive and extremely deadly. Aside from coughing up an inner cat that maims its victim, the cat is also contagious with a poison that is spread through its salive so anything it eats becomes tainted. As the cat runs rampant and the bodies pile up tensions rise on the boat and the already thin crew begins to disolve to nothing and the threat of being stranded at sea with no food becomes a strong possibility as well. But really, the main problem is that damn puke cat.

I love that Greydon Clark plays UNINVITED straight. There's no winking at the camera despite how cheesy this all is. There's actual effort put into this cat monster that boils down to little more than a hand puppet and even the special effects look good. The cast has some real names in it with well known names like George Kennedy and Alex Cord starring along with one of my personal favorites Clu Gulager. There's real talent involved in front of the camera and behind it with Nicolas von Sternberg shooting the film. It only takes one look at his filmography and you'll probably see a dozen or more cult classics you love. And it shows here because UNINVITED is a pretty damn good looking movie. 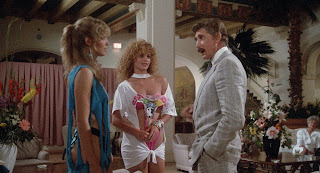 There's not a lot to analyze here, UNINVITED is what it is. - A sometimes goofy, perhaps overly serious but always entertaining horror romp filled with dashes of crime excitement.

The Audio & Video
Vinegar Syndrome delivers UNINVITED to Blu-ray with a 1.85:1 anamorphic widescreen transfer that was scanned in 4K from the original camera negative. Colors are vibrant and realistic while skin tones are healthy and natural looking without any sign of waxiness. There's a great amount of detail in closer shots of surfaces, fabrics and various textures, including the cat puppet. A DTS-HD Master Audio Mono mix handles the audio more than passably and features a really nice sounding track overall. The audio is crisp and mostly free of any background noise or imperfections. 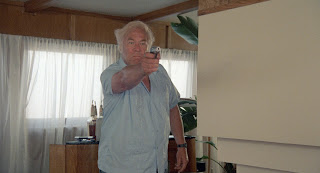 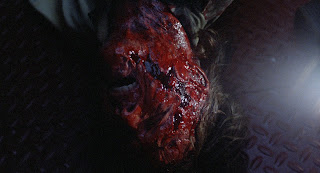 The Bottom Line
I had a lot of fun with UNINVITED and it's motley crew of characters that get slaughtered by this weird mutant cat. If that doesn't sell you on it than nothing will.