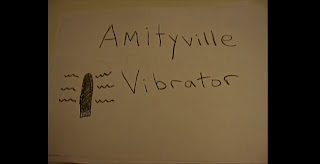 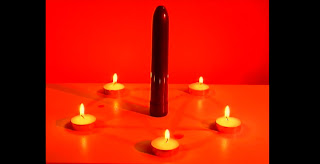 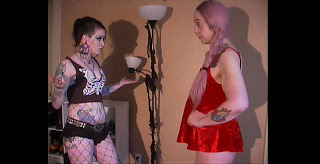 Nathan Rumler is responsible for films such as the gross out vampire comedy Fangboner and Gay For Pray: The Erotic Adventures Of Jesus Christ, a couple films I find to be quite entertaining. If you're at all familiar with them you know that Rumler doesn't mind pushing a few buttons and doesn't care if he offends anyone that is uptight and has their panties in a bunch. He doesn't hold back in AMITYVILLE VIBRATOR where frequent full nudity is only scratching the surface of what we're subjected to. Sex scenes aplenty, extensive blood and gore from James and Mae Bell who have created some of the nastiest gore effects in recent indie horror memory also grace the screen in rapid succession. The story is a bit loose as the movie clocks in at just 66 minutes (and apparently will be cut down a couple more minutes for distribution to cut down on a scene that quite honestly needed trimming down) so with all of the raunchiness there's only so much time to keep things moving briskly with a detective story that has some hilarious scenes in itself. Don't let the sex and blood fool you, Rumler is great with comedy in his movies and adds it in seamlessly here. 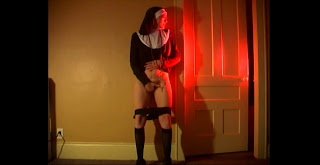 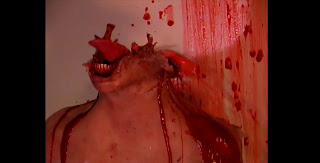