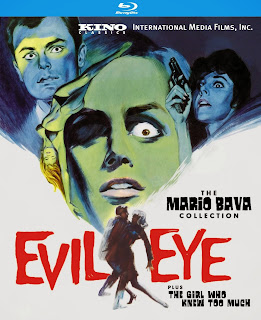 The Film
The giallo craze swept Italy in the 1970s with seemingly every genre filmmaker putting together their own murder mystery thrillers, sometimes heavily influenced by the horror genre and often very stylish and explicitly violent and sexual. Directors such as Dario Argento and Sergio Martino became household names by making some of the finest examples of these films but the genre started almost a decade before the roof was blown off and the cycle exploded.

Mario Bava made the prototype giallo in 1963 with THE GIRL WHO KNEW TOO MUCH in which a young American girl touring Rome witnesses a murder on the famous Spanish Steps in Rome. The traumatic experience leaves her unconcious and when she awakens nobody believes her story. She begins to investigate the crime on her own and uncovers a series of related crimes that may be leading to her being the next target on the killer's list.

The groundwork was laid for the genre and its foundation is rock solid. Bava created a well crafted thriller that is tense and suspenseful from start to finish. The photography is beautiful and the cast is quite good. THE GIRL WHO KNEW TOO MUCH wouldn't turn out to be the best, or most entertaining and it certainly isn't the most gruesome or sexual but it was the first. It quite aptly summed up what a giallo is and would become when they became all the rage several years later.

The Audio & Video
Home run, Kino! This is a damn near perfect A/V presentation for a film deserving of it. The HD transfer of the 1.78:1 anamorphic widescreen transfer is stunning. The black and white photography is deep and stark with strong emphasis on shadows. Black levels are handled brilliantly with no blocking up or compression issues. Detail levels are exceptional from the healthy skin tones, to textures and fabrics and even grains of dirt that you can almost feel. The Italian audio track is crisp and clear with no damage noticeable. The audio has enough body to it so that it doesn't sound thin against the score. The mix of dialogue and score is very well done. The optional English subtitles are perfectly timed and translated so they read very naturally in English.

The Bottom Line
While I suggest the viewers watch Mario Bava's original version of the film, it is a welcomed addition to have the American cut of the film in HD as well. The more Mario Bava films and their alternate versions we can get on Blu-ray the better and this release is a great chance to own both versions of one of the maestro's landmark films.