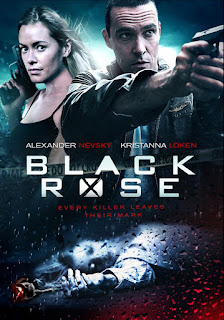 A serial killer is terrorizing the Russian community of Los Angeles, killing young women and leaving a black rose in their mouth. A Russian police Major is enlisted on loan from Moscow by the LAPD to connect with the locals and solve the murders with his young female partner. 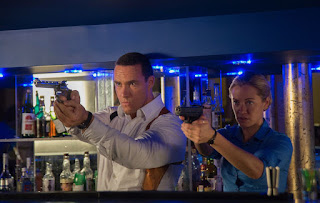 BLACK ROSE was filmed in 2014 and you could say there's a reason that it is just now seeing distribution. It's not that BLACK ROSE is a bad movie but it is painfully familiar. You've seen this movie before under a myriad of titles done better and done worse. Director Alexander Nevsky also stars as the Russian policeman Vladimir Kazatov and after his introductory scene which shows him single handedly stopping a violent bank robbery and hostage situation in Moscow by ramming a truck through the wall and firing off a handful of perfectly placed rounds after his good looks and charm didn't sway the armed robbers into giving themselves up you could call BLACK ROSE a bit of a vanity piece for Nevsky. Nevsky is fine in his role as the no nonsense, hardass Russian stereotype who offers a bit of comic relief when he doesn't understand his partner, competently played by Kristanna Loken, and her typical English phrases. These moments where two cultures clashed for comedic relief were easily the most head-bashingly bad moments in the film. I wanted to yell "Look at these two! He doesn't understand her and she thinks his food is gross! Oh my God it's so fucking funny!". 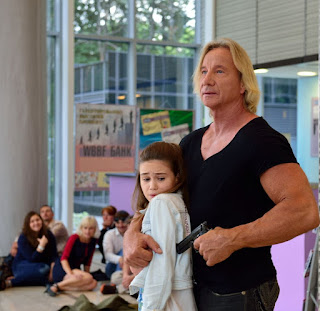 Now, it really isn't Nevsky or Loken that are the problem with the movie, they both play their characters just fine. They have a good chemistry on screen and cringe worthy moments in the writing aside they are an asset to the movie. The writing and overall angle the film takes are its biggest weaknesses. Focusing more on the serial killer would have added an air of darkness and coldness that BLACK ROSE desperately needed. The most interesting thing about serial killer movies is the serial killer and we simply don't spend enough time with him or get in his head at all. The twist is lazy and thrown together and is used in place of better writing with the serial killer character. BLACK ROSE has good performances and that is easily the best part of it, sadly they're within the confines of a movie that doesn't push the boundaries of the hundreds of similarly mediocre straight to video movies it will inevitably be lumped in with.
Posted by Celluloid Terror (Seth Poulin) at 12:08 PM