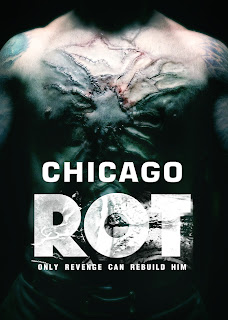 Ambition is something all filmmakers should strive for. Making the most out of whatever budget and talent you have isn't always the easiest thing however, especially for independent filmmakers. If there's one word to sum up CHICAGO ROT it is "ambition."

The film centers around a man nicknamed "The Ghoul" and he's fresh out of prison after a decade of incarceration and now he's hunting Chicago's seedy, violent and supernatural underbelly searching for the man for stole his soul. What ensues is a sleazy, ultra violent, neon and rock-n-roll infused horror/sci-fi/crime mashup that really needs to be seen to fully understand, although I'm not sure I fully understand it after viewing it.

From what I was able to find out about CHICAGO ROT with some internet research is that the film took several years to complete, which means the filmmakers were damn persistent on top of ambitious. It does lead to some moments where the film feels piecemealed together but the direction from Dorian Weinzimmer is so damn good that it really doesn't detract too much from the film's flow. Weinzimmer's direction looks and feels like that of someone that is far beyond their debut feature film. It's stylish and makes the world we're in feel massive and legitimate, never feeling cheap or that they're hiding the shortcomings of various sets like I've seen in plenty of bigger pictures from more experienced mainstream filmmakers with exponentially larger budgets.

The cast is quite good as well and with the number of colorful characters with very distinct personalities it's impressive to see that there isn't much in the way of overdoing it or a performance that feels out of touch with the rest of the film. Brant McCrea stars as Les aka "The Ghoul" and gives a strong performance as the center of the film that the rest of the cast revolves around. McCrea also co-wrote the film with Weinzimmer and if I had to pick something about the film that didn't work as much for it it's the story which is convoluted and as much I enjoy everything that is going on within the film on a visual level I think it may be too much for the story to contain and keep a steady flow. CHICAGO ROT has different levels of story going on and at times it goes back to the piecemeal feeling that I mentioned earlier that it feels like various parts were tacked on in stages. This may not be the case but that's the feeling it gives me and is my biggest gripe with the film.

Gripes are to be had and while I don't absolutely love CHICAGO ROT I quite enjoyed watching it and respect the absolute shit out of it. The costumes, locations, effects and overall quality of filmmaking cannot be overlooked or understated. There is some legitimate Hollywood level work in CHICAGO ROT and it's the ambition that drives this film and the successful realization of that ambition that really sets CHICAGO ROT apart from most indie films.

Too much work, damn good work, went into CHICAGO ROT for it to fade away into the indie film abyss. Go watch it.

Posted by Celluloid Terror (Seth Poulin) at 6:11 AM