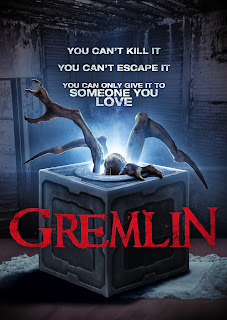 Adam is the father of the Thatcher family who is going through a rough patch after the death of one of their children and now moving in with their grandmother. Things only get worse when they're given a strange box that houses a creature that will kill everyone the recipient loves unless he gifts the box to someone else that he truly loves. As the timer on the box counts down to the unknown final climax of the creature the Thatcher family struggles to deal with this monster and survive their own inner turmoil along with the deadly box.

Director Ryan Bellgardt first made a name for himself on the indie horror scene with Army Of Frankensteins which found a solid fanbase and widespread distribution from Scream Factory. He has now returned with a type of creature feature that could be played for shits and giggles or take on a darker and more serious. He chose the latter and I think the film works well, using the emotional family dynamic with plenty of relatable scenarios to its advantage and get the audience routing for this family to pull through despite their imperfections. This starts at the top with star Adam Hampton who plays an unfaithful husband but his character arc is one that we can all latch on to and his performance is rock solid. As is the rest of the Thatcher family including his wife Kristy K. Boone and their children played by Katie Burgess who manages to brilliantly play the moody teen without being too obnoxious or overacting and Catcher Stair who plays Charlie, the youngest child who is struggling with the death of his older brother.

GREMLIN doesn't hold back like many other horror films seem to these days as no character is safe. Anyone that comes in to contact with the box has a very real chance of getting offed in usually bloody and gory fashion. The creature is CGI but looks good, it moves fluidly and has a smooth look that doesn't stick out too much. The special effects are a mix of practical and CG and while most of the action effects are computer generated they are fine and the practical effects we get to see in the messy aftermath of a killing look quite realistic. Despite the name the monster has nothing in common with the Chinese Mogwai from the 80s classic Gremlins instead this creature looks more like a baby Cloverfield monster and comes from an ancient evil of a fallen God so says the lore. This Gremlin monster is far more vicious and violent than even the most rambunctious Mogwai would be even after feeding him a buffet after midnight and letting him swim in an Olympic sized pool. The lore describing the box and the monster in the movie leaves the final climax open ended with nobody knowing for sure what happens when the time on the box finally runs out.

And that is where GREMLIN almost falls apart for me. Can an ending totally tear a movie apart? Yes it can. Does it happen here? Well, no, not totally but when this small, contained creature feature that really makes the best of what it is and minimizes the common short comings of indie horror features decides that bigger is better and more is more it takes a giant step backwards for me. The climax turns the film in to a giant monster mess that features the worst effects of the film and the giant monster aspect is kept to such a small scale I'm left wondering why they went in that direction. Instead of adding "oohs" and "ahhhs" to movie it added my first and only groans of the 85 minute run time. It isn't a total disaster though. GREMLIN isn't perfect or terribly original, it is filled with themes and plot devices that have filled horror films for years and it hits all the beats of a standard movie of this type but aside from an ending that I didn't care for I think GREMLIN is a decent independent horror film from a director to keep an eye on.
Posted by Celluloid Terror (Seth Poulin) at 11:29 AM