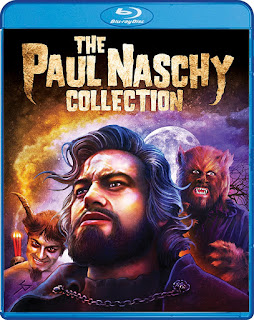 The Films
Referred to as the Spanish Lon Chaney for his appearance in over 100 films, most of which were horror films where he frequently portrayed the monster or villain including over a dozen appearances as a werewolf, Paul Naschy (born Jacinto Molina Alvarez) is an icon of genre films. Naschy passed away in 2009 and unfortunately there hasn't been a great deal done in the age of high definition to honor his legacy. Thankfully that is starting to change with this new box set from Scream Factory and recent and planned future releases from several other horror home video saviors. It goes without saying that his release was the big daddy of all HD Naschy releases announced to date, packing five feature films together, including one of his best werewolf films that he is probably best known for. 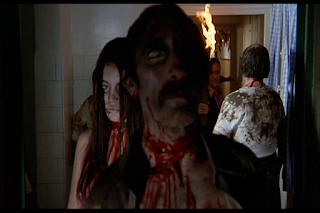 The surreal madness of talking decapitated heads, zombies, witches and warlocks and plenty of bloodshed makes HORROR RISES FROM THE TOMB a perfect place to start this collection. It's among my favorite films in Naschy's filmography. It wears its influences on its sleeve but puts them to good use in creating a bizarre atmosphere and horror. Disc two features VENGEANCE OF THE ZOMBIES, a dual role film for Naschy where he stars as Krisna, an Indian mystic with a crazy family history, a pension for voodoo and a quirky cast of characters surrounding him. This film is colorful, sexy, bloody and a bit weird. There's scenes that don't really fit but they're entertaining and well done so you don't really mind. Then comes the second role for Naschy which features some nice makeup effects and gets the film to get down and dirty in its finale. 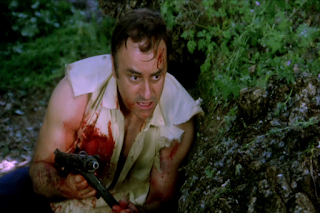 Naschy was obviously a fan of the giallo films of Italy as VENGEANCE has a scene ripped straight from those films but that was just a warm up for BLUE EYES OF THE BROKEN DOLL which is a full blown giallo featuring Naschy as a recently hired handyman at a home owned by a trio of sisters. It's a bit on the psychological side and a bit on the "what the fuck?" side, as many gialli tend to be. It features a fantastic foot chase through the forest when the cops believe they've discovered the identity of the masked killer who is murdering blue eyed, blonde haired women and carving out their eyes, and is one of Naschy's best performances. The killer reveal is a good one with plenty of red herrings to cloud the surprise revelation. The film's alternate title is HOUSE OF PSYCHOTIC WOMEN which may have been a better alternate title for HUMAN BEASTS which is a movie you won't soon forget. The plot is convoluted as it follows Naschy as a hitman for a Japanese gang who is being hunted down after stealing their sack of diamonds. Following a shoot out that leaves him wounded, Naschy wakes up in a large house under the care of a doctor and his two gorgeous daughters. Strange things happen around the house while the gang continues their search for Naschy, who is busy seducing both daughters at will. When the messy plot is all said and done we're left with my least favorite film of this collection but it is still a very entertaining one filled with sex, gore, shootouts, man eating pigs, cannibalism, and more. 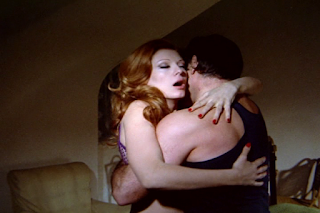 It's fitting that the first Paul Naschy Blu-ray collection ends with one of his infamous werewolf films and it's nice that it is one of the best - NIGHT OF THE WEREWOLF. This film directed by Naschy himself features the man as the Count Waldemar Daninsky, who has been sentenced to be put to death while wearing The Mask Of Death for being a werewolf. Also sentenced to death for witchcraft and other heresy is Elizabeth Bathory and her family. NIGHT OF THE WEREWOLF takes off when a pair of grave robbers free Daninsky of his curse by removing the silver from his heart and a group of sexy coeds resurrect Elizabeth Bathory in a blood ritual and it all adds up to a sexy vampire, werewolf mashup with a great dusty castle setting and an awesome Blind Dead skeleton zombie ripoff monster. NIGHT OF THE WEREWOLF rivals HRFTT as my favorite film in the set.

I hope Scream Factory is considering a second volume of the Paul Naschy collection because they've done a very nice job culling films for this set, giving audiences a nice overview of Naschy's legacy. There is no shortage of great and entertaining films for a second volume and it is my hope that horror fans latch on to Paul Naschy and put out a demand for more. I just wish he was alive to see his films get the HD treatment. 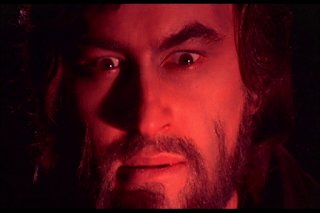 The Audio & Video
Each film has been newly scanned in 2K by Scream Factory giving us debuts of three of them in high definition and a very noticeable upgrade in picture quality over the previous BCI Blu-ray of Vengeance Of The Zombies and Night Of The Werewolf. Horror Rises From The Tomb, Human Beasts and Night Of The Werewolf are presented in 1.85:1 anamorphic widescreen transfer while Vengeance Of The Zombies and Blue Eyes Of The Broken Doll are in their original 1.33:1 full frame aspect ratio. Each film has their ups and downs as far as picture quality goes but thankfully there is a high floor to the bottom end of that spectrum for the most part. Even at their worst four of the five films look good and at their best they look spectacular. The majority of the films spend more time towards the top end of that spectrum than the bottom leaving us with a lasting impression of the high quality transfer that feature striking colors, strong detail levels in everything from clothing, props and sets to fleshy, natural looking skin tones. Black levels are deep and there's only a bit of speckling throughout. Grain levels vary as well but are usually healthy and not overly noisy.

The outsider here is Human Beasts which looks quite a bit worse than the rest of the films with a very soft and noisy picture quality. Finer details is hard to find and really only present in the odd shot that is in better condition. I can chalk this one up to the source materials being in rough shape and sometimes there's only so much you can do. 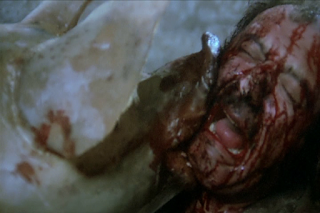 From an audio standpoint each film features two options, both presented in DTS-HD Master Audio mono mixes- the native Castilian and English dubs. In most cases the tracks are very similar in quality, with crisp, clear presentations and a well done mix allowing dialogue to come through clearly while the soundtrack shines without becoming muddy one way or the other. The tracks are free of background noise or excessive damage. Again the outlier here is Human Beasts which I'd suggest only listening to with the native Castilian track because the English track sounds quite a bit worse with background noise and damage. Optional English subtitles are available for all five films.

Please Note: The images DO NOT represent the picture quality of these Blu-rays.

Also included is an attractive 24 page color booklet by author Mirek Lipinski featuring an essay on each film. 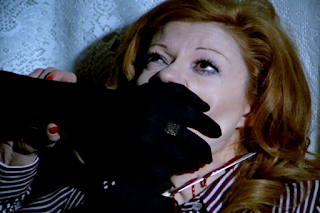 The Bottom Line
Naschy rules! And this collection of Paul Naschy films really highlights his work, giving viewers a range of his roles both in front of the camera and behind it. Naschy did quite a bit more beyond the wolf man character he is best known for portraying and this set gives new fans a glimpse into what the man had to offer while giving the people that already know about him some of his most memorable movies including one of his best werewolf movies. I highly recommend Scream Factory's new box set for all horror fans and for Naschy aficionados this is an essential collection!