Memories Of A Legend: Saying Goodbye To George Romero

News broke earlier today that George A. Romero, the creator of the modern zombie with his timeless film Night Of The Living Dead, passed away at the age of 77 from lung cancer. That news not only hit me hard but it hit the entire horror community hard. I didn't need to take a look at my Facebook feed which was filled with friends, acquaintances and people I only know as an picture of someone that isn't them on a computer screen sharing their memories and feelings about Mr. Romero's passing, all very similar to the same memories and feelings that I have. 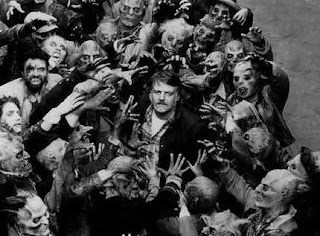 George Romero seemingly broke ground with each new film he made for a time and was never short on poignant and important commentary within his films. His films were not only means of entertainment, which they were, or means to scare you, which they did, but they were intended to make the viewer to take a step back and come out with a better version of themselves. From casting a black man in the lead in Night Of The Living Dead to commenting on the frightening power of addiction in Martin, to the commentary on consumerism and capitalism in Dawn Of The Dead. It is an injustice that Romero's films are rarely looked at beyond being horror films, even if they're considered "great" horror films, there is a stigma to horror where it is viewed as less of an art form. That is a great injustice to George Romero who is an artist in the truest sense of the word. He refused the standard studio system of filmmaking for many of his films even if it meant a smaller budget and tighter production.

I had my first chance to meet George Romero about a decade ago, forgive me if I don't remember exactly which year it was, at a horror convention called Horrorfind Weekend. This particular event was being held in College Park, Maryland a bit outside of Washington D.C. but I saw he had a line that was about half an hour long so I decided to come back later in the day. Later in the day the line was significantly longer and I was tired so I said to myself "next time". I regretted not waiting in that half hour line for years as that wait really isn't too bad at a horror convention for an absolute legend of the genre. That regret would follow me for years as I had a couple more opportunities to meet the man but this time at a more popular and busy show which had lines extending 2 or 3 hours. I decided not to wait in those lines either. Then a few years ago a rumor circulated that Mr. Romero was retiring from the convention circuit due to problems with his hand that made signing autographs difficult. I was lucky though because shortly after that announcement he was actually being announced for more appearances and in October 2015 George was signing at Monster Mania Convention just a short 20 minute drive from me in Hunt Valley, Maryland, a suburb of Baltimore. I finally got to meet George and picked a poster of Martin, my favorite of his films and a film that is vastyl underrated and overlooked in his filmography. George was incredibly friendly and warm, and my choice of poster brought a smile to his face and we talked about Martin briefly. He mentioned how much he loved making it and that he doesn't get to sign too many autographs for it. And now less than two years later he's passed away having lived 77 years filled with creativity, love, and art but I will miss him. I will miss hearing of new projects that he's working on that may or may not ever come to fruition (please let Road Of The Dead happen now as one last Romero hurrah) and I'll miss seeing his genuine smile and huge signature glasses in all of the pictures he takes with fans. 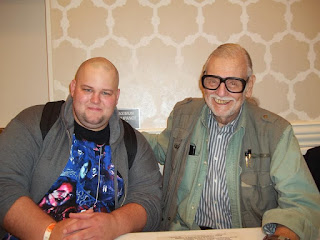 Cinema has lost a legend today and not just horror. George Romero's importance to the art form of movie making transcends genre and it is a crime that his legacy was not more widely regarded outside of the horror community while he was alive. Horror fans certainly let him know how important he was though and he definitely felt that love. If you've ever heard the saying "Don't meet your heroes" ignore that. Sure, some of them might let you down but if I listened to that, or if I kept procrastinating I would never have met George Romero and I would have cheated myself of a moment and memory I cherish. Let them know you appreciate their work and the genuine ones will make it worth your time. George did.

I wish I could say something more poignant or gripping or important but I didn't know the man personally. Our meeting was made up of no more than two minutes among a long line of people that would have a similar meeting with him but if this is to be my lasting tribute to an important film maker that I am a shameless fan of than I'm glad to share my memories of the man and briefly discuss  the importance of his contributions. Now go watch Martin, for George. 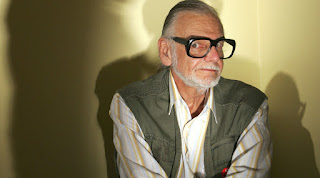