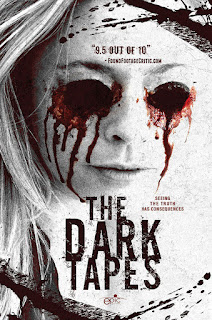 The Film
THE DARK TAPES is a found footage anthology film based around the idea of proving the existence of creatures that we can only see during our REM sleep cycle, when we're at our deepest sleep. This segment is called "To Catch A Demon" and serves as the main wraparound for the film and something we come back to intermittently between segments. The story itself isn't incredibly long and really didn't need to be broken up but I can see and understand why they used it as a tool as such. I think the best parts of this segment are at the end when they finally show the goods we've been waiting for. Up until the appearance of these creatures it's feels quite pedestrian and familiar.

"The Hunters And The Hunted" is the first solo story to play out entirely in one shot and it was something that left me wanting more. The story starts out with a newly married couple facing strange things in their new home. Doors slamming, furniture shifting, physical encounters with these seemingly paranormal inhabitants. Call in the paranormal investigators and we're all set up for the painfully cliche Paranormal Activity style jump scare snooze fest. And then the story spins a most welcomed 180 and drastically turns the whole thing on its head. Without spoiling it I can say it not only saved the segment but left me wanting more of it. I think this was something that could be used as a set up for a feature length film using this story. It's flawed but I really liked where it ended up.

"Cam Girls" is next and sets up a pair of attractive roommates who run a sexy webcam show for money. They decide to give Gerry, a frequent viewer and all around nice, but very shy guy, a free show. This ends up feeling longer than it is and ends up being quite predictable and aside from one interesting moment in the background I think was a bit of a waste, despite some solid acting. This leads us to the final segment "Amanda's Revenge" which I think is the best production from start to finish as a totally enclosed product. The acting and characters drive this one as we are finally given characters to care about and they're well rounded and very likable. Amanda is forced to deal with strange unseen forces that torment her at night after a very traumatic event at a party. This helps Amanda unlock the deeper and greater powers of her mind but could also prove the existence of some beings that she'd rather not see. The effects in this one get a bit bonkers at the end and I really enjoyed it. This is another entry that could have benefited from a longer runtime and budget to give those effects a stronger presence and look less processed.

Found footage films remain a staple in the horror genre because they require less in the way of crew and equipment in most cases. They can be made cheaper than traditional films and even using lower quality equipment can easily be worked in to the story itself and remain believable. The sub genre has seen its ups and downs since its inception but the entries into the sub genre of late tend to be stale retreads that are far from exciting and new. THE DARK TAPES may not shy away from many of the found footage tropes but it does try to play with some of them in ways that we don't often see and even if it was an uneven film with ideas that were better than their execution it was nice to see something different out of a found footage film.

The Audio & Video
Epic Pictures releases THE DARK TAPES with a nice looking and sounding DVD. The anamorphic widescreen transfer has deep black levels of which there are many, a strong color palette and a solid overall sharpness and clarity. The 5.1 surround audio mix comes through loud and clear with no background noise or damage. Levels are steady throughout.

The Extras
Special features include being able to individually select a tape to watch and the original trailer.

The Bottom Line
THE DARK TAPES is a noble attempt at making a better found footage horror film that I don't think lives up to its potential. I recommend the film to found footage addicts as I think there's a lot they'll like either way.