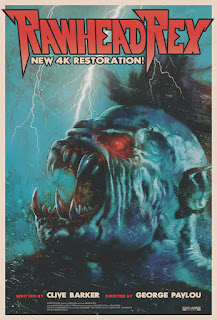 The fine folks at Kino Lorber have done God's work and restored RAWHEAD REX, the cult classic film written by Clive Barker and based on one of his short stories, in 4K. This film has long been sought after by horror fans and fans of schlocky "what the fuck did I just watch" films alike. It hasn't seen a release domestically since the days of VHS and collector's have driven the price of those tapes up drastically and the region 2 DVD releases it received weren't much of an upgrade over the old analog releases we were left with here in the States.

That is all in the past and we get to see director George Pavlou's rubber suit opus of an ancient Irish demon in glorious 4K resolution. And that's not all as Kino has set this thing up for theatrical exhibitions as well. Click HERE for more information on the restoration and for booking inquiries for. And for now check out the new 4K restoration trailer (it's stunning!)