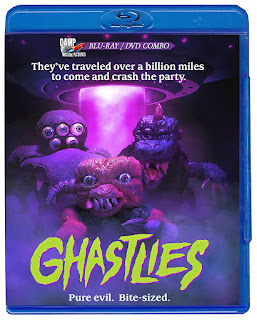 
The Film
A spaceship interrupts some sort of Satanic sacrifice and the small creatures within devour almost everyone involved before they're captured and locked in a bunker. Five years later they're accidentally set free during a weekend getaway by a group of sorority sisters and these little guys are hungry again.

GHASTLIES is a mini creature horror movie in the tradition of Gremlins, Ghoulies and Critters and has more in common with the worst those franchises have to offer than the best. That's not to say there isn't some fun to have here with colorful and creative design of these otherworldly creatures like the green dragon wearing a fur coat, the five-eyed purple dude and the orange fleshed horned-blockhead guy, all of which feature some sharp teeth and an insatiable hunger for Earthly beings. They're without a doubt the highlight of the movie. You don't watch Gremlins hoping to see a group of rather obnoxious sorority girls (aside from Jessica Huether as the nerdy "brains instead of beauty" girl who is far from unattractive) drink in the woods and you don't put on Critters to watch a couple of bumbling bicycle cops in mismatched uniforms pump up their tires in the same woods that are supposed to be very secluded so these girls can "party as hard as they want and nobody will stop them". Their partying is quite soft and they're bothered repeatedly. There is a good bit of ghastly horror from the GHASTLIES and it is quite low rent and cheap. Sadly they puppets have very little movement of their own and what you see on screen is limited to the puppeteer shaking them around while performing an attack. I get it the budget constraints and it didn't hurt my enjoyment of these moments too much at all. 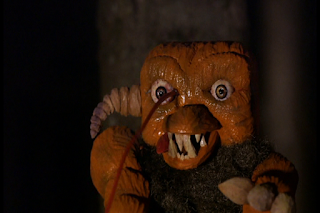 Unfortunately those scenes of campy goodness are put on the back burner for too much of the film's 75 minute run time and we spend a lot of time with characters I wouldn't want to be in the same room with. The lead Sloane is played by Kim Valentine who appears to be a good 15 years older than the rest of the girls and I'm not exactly sure why she's hanging out with them besides the fact that she was (is?) in the same sorority. It seems like a grown woman approaching middle age hanging out with kids that may not legally be able to drink. It just felt odd. Odd is better than I can say for the editing in this movie though. Did anyone pay attention to it? There are countless shots that don't match up to the ones before or after and a simple little fix would have been fine such as a guy getting chased through the woods by a Ghastly and his boxers are wet and dirty long before he ever goes to the ground. It's obvious they're dirty from a previous take and this happens continuously throughout the film or characters will be in one area and in the next cut they're somewhere else and it's obvious that parts of a previous scene were placed in another spot and it's absolutely jarring to watch. I don't want to rag on GHASTLIES too hard over this after all it is "just" a cheesy independent creature feature but this isn't difficult stuff and it honestly just came across as lazy to me.

I had fun with GHASTLIES. The little monsters have an interesting and original look despite wearing their inspirations on their sleeves, the best moments of the movie have that B-movie charm and the score even works in a cheesy pre-set Casio keyboard kind of way. But there's so many questions I'm left with. Why the need for a Satanic ritual? How did they escape being locked in the bunker? (the girl simply trips over it, never doing anything that would unlock it). Why does it take 50 minutes to make the Ghastlies the focus of the movie? Why is this middle aged woman hanging out with these kids? Why are these cops in the movie at all and why couldn't they at least get matching outfits? The good part of GHASTLIES are cute, bloody and fun but the movie is a mess to say the least. 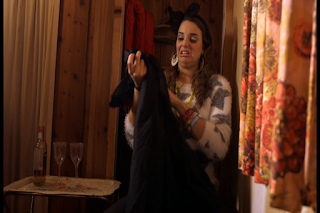 I can't let this review go by without mentioning that the movie does have a great little GHASTLIES cartoon at the end. That sort of raises more questions to me but I'll sit back and just enjoy that little slice of animated goodness on its own.

The Audio & Video
Camp Motion Pictures gives us a beautiful Blu-ray of GHASTLIES with an anamorphic widescreen presentation that has a striking color palette including bloody reds and the Crayola box used in the design of the monsters. Detail level is great as well showing off the fuzzy and slimy nature of the creatures along with skin tones and surfaces and textures. 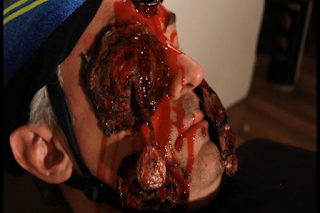 The Extras
An audio commentary track and a short interview with actor/creature designer/puppeteer John Migliore are the main special features. They're rounded out by a trailer for this film and a selection of trailers from other Camp Motion Pictures releases. 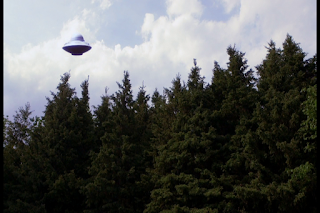 The Bottom Line
GHASTLIES isn't the next cult classic mini monster horror franchise and I doubt it'll spawn any sequels (though it could). It's messier than it needs to be and leaves a lot to be desired but the GHASTLIES themselves are adorable little carnivores from space and whenever they're around I couldn't help but have a good time.

GHASTLIES is available HERE
Posted by Celluloid Terror (Seth Poulin) at 9:54 AM