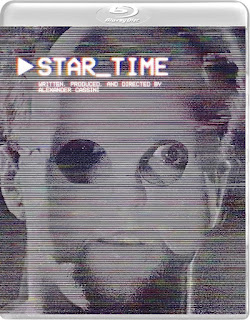 The Film
"This is the fourteenth murder..."
"Fourteen? Fifteen! Fiveteen! Can you believe this, Henry?"
"Amateurs."

Henry is a delusional young man with a fragile mind. He finds comfort in his favorite television programs, even telling his social worker about the time he spends with his favorite program, "The Robertson Family" each week. When "The Robertson Family" is canceled he becomes suicidal and is approached by a mysterious agent named Sam Bones (John P. Ryan from It's Alive and Class Of 1999) who promises Henry the same fame and notoriety that his favorite television actors have if he kills certain people. After donning a baby face mask for personality Henry agrees and goes on a killing spree until Sam instructs Henry to kill his social worker.

STAR TIME received some love and recognition from the festival circuit before hitting VHS and fading into obscurity in 1992. Having never heard of the film before the announcement of this release I was curious to see what it was all about but was a blank slate going in. It didn't take long to realize that STAR TIME wasn't going to be a straight forward serial killer film like the plot synopsis hinted that it could be. Writer/Director Alexander Cassini is far more concerned with creating a character piece about a psychologically damaged man morbidly obsessed with television to the point that instead of taking his own life when the television program that he feels is the only thing he's holding for is canceled he is persuaded by a mysterious man claiming to be a talent agent to go on a killing spree and live in infamy forever with his handiwork gracing the TV screen each time he kills. Henry is slow to take to the idea, failing on his first attempt and attributing it to having nerves on opening night. Quickly Henry has racked up over a dozen killings and Sam is loving his work to the point where he scoffs when the nightly news incorrectly reports on the number of killings so far. 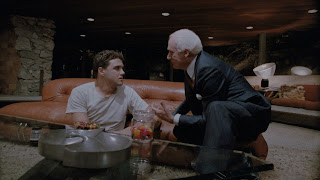 Henry is a lost soul, fully under Sam's rule until he visits his old social worker that he had sent a video tape to stating that he had killed himself after his favorite show got the ax. Wendy, played lovingly and with a sense of helpless despair by Maureen Teefy, is the voice of reason and reality to Henry, believing Sam is nothing but an imaginary friend and a creation of a broken mind. Sam calls for Henry to kill Wendy which sends Henry into a frenzy to protect his true friend until he finally gets his fifteen minutes of fame and scream his name into the lens of the television camera for all to hear.

STAR TIME would not be a success without great performances and our main trio all turn in excellent ones. Michael St. Gerard does quite the 180 from his role of the heartthrob Link Larkin in John Water's Hairspray from a few years prior, convincingly and tragically portraying the broken Henry. St. Gerard doesn't have a long list of credits but this could definitely be the performance of his career. It's easy to say that you have no empathy for a killer but your heart absolutely breaks for Henry. John P. Ryan is no stranger to any film fan, I bet you've seen one of his movies even if you don't know him by name and he turns in a strange, at times diabolically comedic and altogether devious performance as the devil on Henry's shoulder. Cassini makes the movie something special with his style behind the camera however. STAR TIME is a prime example of a director making his debut feature film and showing no fear taking chances. Cassini's experimental side comes through time after time with interesting camera movements, angles and set pieces. The room full of nude women on TV monitors seducing Henry is instantly burned into my memory and I would not be surprised if the creators of Rocko's Modern Life had seen this film before making the episode in which Heffer becomes obsessed with TV which features a scene strikingly similar to the one here. 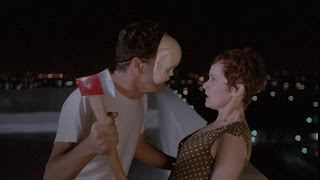 Cassini succeeds more often than not in the chances he takes and I never asked myself why he would make that artistic decision. The film's commentary isn't hidden or shadowed, it is quite obviously dealing with the obsession of fame and TV on a fragile mind and even over a quarter century later this is still something we deal with daily as violent media of all forms is blamed and brought in to question with each new murder. I hate to think that STAR TIME'S relevance is here to stay even if it deserves to stick around because it's a good film.

STAR TIME can be considered a horror film and without much work at all it could have been a bloody slasher film but I think that cheapens and fails the film. It is a psychological horror film, it is a comment on the price and worth of fame, after all once you scream your name into the camera who cares after the screen goes black? Who will remember Henry Pinkle when the channel goes off the air and the color bars pop up. Despite that STAR TIME probably has an entertaining slasher film in it and even with it being set around several bloody set pieces in the second half of the film, STAR TIME is more than just another exercise in blood and guts. 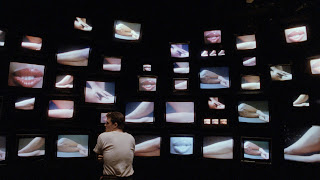 The Audio & Video
A bit more than an obscurity, STAR TIME is a title I had never heard of before this release was announced by Vinegar Syndrome and it certainly deserved to be rescued and shown some respect. Vinegar Syndrome has restored the film from its original 35mm negative and delivered the original director's cut on to home video for the first time and it looks magnificent from top to bottom. Detail levels are exceptional, particularly in closeups such as character faces and clothing and texture. Just take a look at Sam Bones' green sequin suit and you could count each sequin and see the perfect detail of each one. The color palette is vivid and natural and black levels are deep without any compression or blocking issues. The 2.0 DTS-HD Master Audio track sounds pristine. The track appropriately mixes the dialogue and score in a crystal clear presentation. There's no crackling or hissing or other distortions and no background noise to speak of. 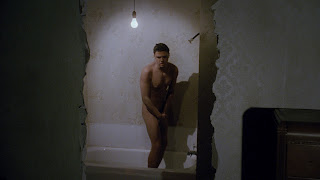 The Extras
-Audio commentary track from director Alexander Cassini
-"Shooting Star Time" - An interview with cinematographer Fernando Arguelles clocking in at over 30 minutes. This is a great background into the production of the movie.
-"The Great Performance" - A short film by Alexander Cassini
-Theatrical Trailer
-Reversible Artwork 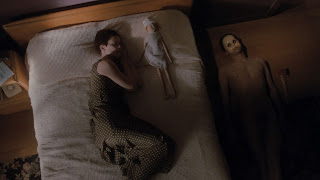 The Bottom Line
STAR TIME won't find a fan base with everyone. Its somewhat avant garde approach definitely limits who will find this film enjoyable more so than if it had gone for the more straight forward horror film approach that it hints at but in that case it wouldn't be nearly as memorable and wouldn't be the same viewing experience. Vinegar Syndrome has beautifully restored the film and surrounded it with some worthwhile bonus features that I think experimental film fans will appreciate.

STAR TIME is available HERE
Posted by Celluloid Terror (Seth Poulin) at 12:36 AM