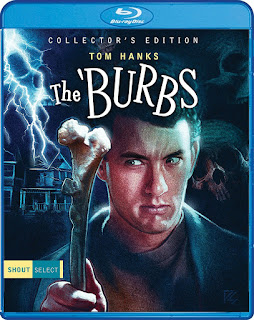 The Film
Ah, the suburbs, the idyllic slice of Americana where you groom your lawn, grill your meats and suffer from an unwavering paranoia that your new neighbor is some sort of strange maniac. There's really very little as beautiful as getting your fellow neighbors together to spy on the new folks because who the hell are they to invade your cul-de-sac and not introduce themselves? And what are those weird sounds coming from their basement? And why do they only come out at night? You better find out... for the good of the neighborhood!

Tom Hanks stars as Ray Peterson, a typical middle class American taking a week's vacation from his job. All he wants to do is lounge around the house and perhaps get some projects done but his wife (Carrie Fisher) wants to take a trip to the lake with their son. Balking at the idea because of all the hassles and headaches of a long trip, Ray and his wacky conspiracy theorist neighbor Art (the late Rick Ducommun) and short fused veteran gun nut Rumsfeld (Bruce Dern) get caught up in a scheme involving their new neighbors, the Klopeks, who live in the rundown old house next to Ray and keep to themselves. They also have strange noises and smells coming from the home and Ray's son has seen them digging holes in the back yard late at night. Paranoia boils over quickly in the 'burbs and when old man Walter at the end of the street goes missing for a couple days the trio decide to get to the bottom of it when the Klopeks leave for the day. 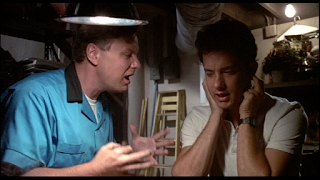 THE BURBS is a dark comedy that ages like a fine wine. Even after well over a dozen viewings I'm still picking out subtle things to laugh at. There are big laughs in the writing and main jokes and they hold up perfectly well but there's so many small little jokes and so much humor to be found in facial expressions and body language that it lends itself to repeat viewings. The main trio has a fantastic dynamic and natural on screen chemistry. They're the perfect microchosm for weird, quirky neighborhood streets where you're sort of forced in to these relationships with people you might not really like but you tolerate for the sake of a peaceful existence and sometimes even buddy up for some weird adventure (like breaking into the new neighbors house and blowing it up). These three guys wouldn't normally be friends but their houses are next to each other and they have little tiny bits in common, (like wanting to break into the neighbors house and blow it up) so they join up for this wacky adventure that we're privy to enjoying. The audience of this film is basically a wider extension of Corey Feldman's character who plays a teen who is home alone and enjoying the circus taking place on his street, constantly inviting more friends over to watch it all go down. He's a great backdrop for the entire thing. And God bless Carrie Fisher in this movie, the late princess looks amazing and turns in a fantastic role of the sole voice of reason on the entire block. If this street was real I'd imagine she'd end up in a padded room before too long. 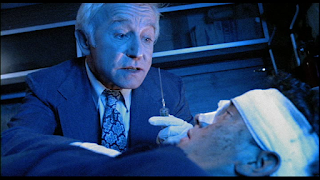 I think the strong writing is a rock solid foundation for the film to be built on but THE BURBS excels and becomes a classic comedy because the entire ensemble cast is on board with it and nobody feels that they're above the material. Our heroes and protectors of the street are made better by great counterparts and the Klopeks are just that. Starting off with the youngest, Courtney Gains plays a mostly silent weirdo to a T while his older relatives, Henry Gibson plays the head of the household, a doctor at the local university who performs various experiments in the house. He's the one you have to look out for, adding an unnerving creepiness that the family didn't exactly need to be unnerving and creepy. The gem of the bunch though is Brother Theodore playing Reuben Klopek ("About a 9 on the old tension scale there, Rube!"). Reuben is the doctor's brother, and is a grumpy, grouchy old man scowling at the world and being generally miserable toward everyone. I love his performance. Add in a couple garbage men (Dick Miller and Robert Picardo)  for a hilarious scene that sends garbage flying all over the cul-de-sac and we've rounded out almost the entire cast and they're all fantastic.

Joe Dante uses some unexpected music cues throughout, including some Ennio Morricone western pieces that somehow fit perfectly, and even gives us some stylish directing with sweeping pans of the neighborhood in single takes that give a truly organic and realistic feel to the street. There's no fat to be trimmed in THE BURBS. The film is infinitely quotable and scene after scene replays in my head when I call up the memory. As it approaches its 30th anniversary it feels as fresh to me now as it did the first time I watched it in the mid-90s as it played on whatever TV station was airing it at the time and remains one of my favorite comedies of all time. 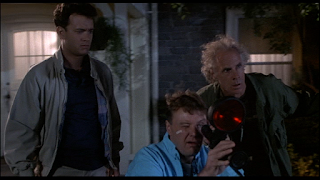 The Audio & Video
Shout Factory delivers THE BURBS to Blu-ray via a new 2K scan of the film's interpositive which looks good and is quite the upgrade over the previous Universal Blu-ray that used a dated master. The anamorphic widescreen transfer features colors that are mostly lush and vivid while remaining true to their real life nature. Detail is strong for the most part but at times becomes a bit softer and fine detail is lost. This is similar with the color in which the vivid nature fades a bit during grainer moments. This isn't the first special edition the film has received as Arrow Video released the film on Blu-ray in the UK back in 2014 with quite similar video results to my eye however their release was much grainier at times and didn't look quite as sharp throughout. Shout's disc may feature a bit of digital tinkering but it still features a natural look and one that is overall a more pleasing viewing experience to me.

This disc features a DTS-HD Master Audio 2.0 stereo mix that sounds as nice as it should. A nice five or seven channel surround mix would certainly be welcomed but this stereo mix is of the highest quality for what we're given. The audio is crips and clear with no noticeable distortions interfering with the dialogue or soundtrack.

Note: The screen grabs presented in this review do NOT represent the HD quality of the Blu-ray. 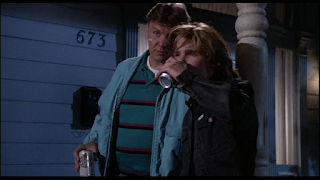 The Extras
Special features are plentiful and far outweigh the nearly barebones Universal disc from a couple years ago.

Included in this release is an audio commentary track with writer Dana Olsen and it is moderated by Calum Waddell ensuring that the track is lively and on point. The "There Goes The Neighborhood: The Making Of The Burbs" documentary is the best part of the special features and includes interviews with many of the big names you want to hear from including director Joe Dante, and actors Corey Feldman and Courtney Gains. The original workprint of the film is a nice addition as well which features deleted, extended and alternate scenes. This is obviously a bit rough in presentation but I love seeing workprint versions and how they compare to the final cut. Finally an alternate ending, theatrical trailer which were both included in the old Universal release and a still gallery round out the extras. 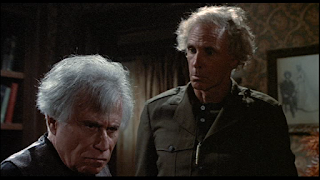 The Bottom Line
THE BURBS is one of my all time favorite films and while this release from Shout Factory's Shout Select line isn't perfect it is my favorite release of the film on home video to date including Arrow's UK release. This is a must own release.

THE BURBS is available HERE
Posted by Celluloid Terror (Seth Poulin) at 12:04 PM