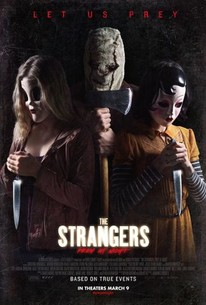 The Strangers hit theaters in 2008 and found great success at the box office despite mixed reviews. I found the movie to be a tense and altogether unnerving home invasion film. The trio of killers, two female and one male each wearing a different mask, were relentless but patient, and certainly cold and calculating. They seemed to take as much joy in the process as they did the kill. When asked by one of their victims why they were doing this they offered a simple response; "Because you were home." It offered no insight or sense of reasoning and made for a chilling scene. A decade later the film holds up, aided by its score that sets the atmosphere which is a backbone for the film.

Now a decade later a sequel has been released. THE STRANGERS: PREY AT NIGHT features a similar plot as the trio of killers stalk a family who plan to spend some time with relatives before dropping their daughter off at a boarding school. The secluded park is mysteriously empty and it doesn't take long for the masked killers to begin preying on the family but find resistance from the teenage brother and sister who fight for their survival with every ounce of strength they have.

THE STRANGERS: PREY AT NIGHT sounds like a very similar sequel on paper, and in many ways it is but instead of focusing on tension and building suspense this sequel takes a more is more approach and turns the film into an almost straight forward slasher film, complete with final girl. The tone of the film has shifted from stalking and atmosphere to bigger and louder like literally driving a truck into the trailer's living room. I wouldn't say The Strangers was a smart film, certainly effective but it isn't smarter than your average home invasion film but it's successor certainly is dumber. And bloodier. There's no shortage of blood in the original film but there's no holding back here, even giving us a couple of gorier shots but it's not enough for the film to fall back on to become a full blown slasher. The film still wants to be a tension based home invasion horror film and keeps its roots in that area but it desperately wants to fit in with the best slasher films of the 80s. There's plenty of 80s nostalgia thrown shamelessly at the audience and two of the moments during the climax and end of the film are embarrassingly cliched ripoffs from Christine and The Texas Chainsaw Massacre. Groan inducing describes it pretty well.

There's two sides to every coin though and some of that 80s nostalgia simply works at least in a single scene vaccum. Blasting Bonnie Tyler's "Total Eclipse Of The Heart" while a boy fights for his life alongside and in a pool while the music fades in and out as the boy goes underwater and comes up for each breath and the entire scene is drenched in the rainbow of light from neon palm trees. Maybe it's my fondness for the song but I believe this scene oozes style and is fucking brilliantly done. In fact there's plenty of moments that the movie shows a visual flare that I really dig, to the point where as the closing credits rolled I thought "If I was making a slasher film I'd want the cinematographer of this film to shoot it for me." and after looking up Ryan Samul's other credits I'm not totally surprised as he's shot some good looking horror films over the last 15 years including Stake Land and Mulberry Street. And I have to give a mention to Bailee Madison who stars as the troubled daughter Kinsey, the lead that the film revolves around. While the acting in the movie is all decent and more than competent, I think Madison proves she can play the final girl pretty well and I wouldn't mind seeing her in more horror films.

THE STRANGERS: PREY AT NIGHT is confused, not knowing what it wanted to be. It's too into being a nostalgia act for slashers to successfully reproduce what worked about the original but it isn't even a good slasher when you get down to it. I didn't totally hate it, I loved how it looked and the music choices, I really loved one scene, but it's a mess and I'm not totally surprised as I haven't yet found a film from director Johannes Roberts that I am a fan of. I can't say my expectations weren't met as I didn't have any but I was at least a bit hopeful that it would be a surprise hit to me like its predecessor. Alas THE STRANGERS: PREY AT NIGHT is at best a harmless cliche and at worst a shitty nostalgia act. I've seen some reviews absolutely tearing it apart and I don't think it's that bad, not even close but it definitely isn't good.

But damn, do I love that pool scene.
Posted by Celluloid Terror (Seth Poulin) at 7:45 PM